The streaming-music world is fragmented. You have Spotify, but your friend has Rdio. Meanwhile your brother has Rhapsody. None of you can share music with each other unless you create another account on another service. Rhapsody wants to fix that problem via Twitter Cards and maybe pick up some more customers on the way. 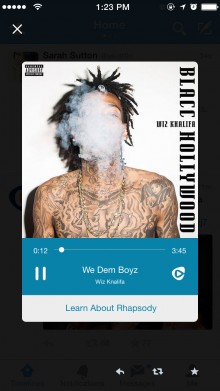 Today, Rhapsody announced that it would let its subscribers share music via Twitter Audio Cards to anyone that wants to listen. Anyone that clicks on the card that appears in their Twitter timeline will be able to listen to the entire song for free, not just a 30 second sample.

Subscribers can share songs from an available library of 34 million tracks. The songs can be shared from both mobile versions of Rhapsody and a desktop browser. The initial offering is currently only available in the United States.

In addition to gaining more customers via sharing, Rhapsody also wants to make music more social. “At some point music became very very insular.” CFO Ethan Rudin told TNW. Now you can share the music your enjoying with all your followers instead of sitting enjoying it alone with earbuds stuffed in your head.

Rhapsody’s Premier service that lets you listen to any track on any supported devices, including mobile, is $9.99 a month.