This article was published on November 6, 2012

US online music subscription service Rhapsody has given its Android app a big lick of paint and rolled out a slew of new features.

The app features a new full-screen player which includes the album art, while also giving access to all the player controls. It’s also worth noting that the Rhapsody tablet app isn’t merely a resized smartphone incarnation, it has been optimized specifically for larger-screen Android tablets.

Besides an aesthetically pleasing new interface, the app also sees the Beta launch of a new ‘Replay’ feature, which remembers songs you listened to and when, and will suggest music based on your listening history, including the time and day. 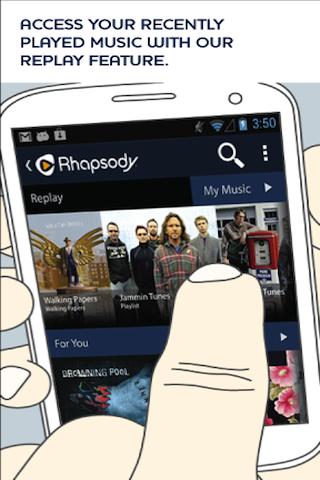 Billed as its ‘new concierge feature’, Rhapsody Replay appears on your home screen after learning your listening patterns.

“Our customers told us that in addition to discovering new music, they enjoy listening to familiar favorites,”  said Paul Springer, senior vice president, worldwide product and design, at Rhapsody.

In addition to Replay, the latest Android app update includes a whole new homescreen that showcases new releases, playlists and content curated by Rhapsody’s editorial team, as well as a wipe-to-skip feature.

Founded initially in 2001, Rhapsody gives its subscribers unlimited, on-demand access to more than 16 million songs on across multiple platforms. While it’s currently US-only, Rhapsody completed the acquisition of Napster International back in January this year, paving the way for the company to formally enter the UK and Germany.

Rhapsody is headquartered in Seattle, but also has offices in Frankfurt, London, Luxemburg, New York and San Francisco.