This article was published on November 20, 2018

After a lengthy delay, the Spyro Reignited Trilogy finally hit shelves last week. I’ve been playing it nonstop ever since, and as a longtime fan of the little purple guy, I’m more than satisfied with it, though admittedly it does come with a few control issues.

We all go into a game review with a little bias — we’re human, not score-spitting automatons (full disclosure: Activision provided me with a code). But I’m going into this with more personal history than usual. Spyro was to me what Mario and Sonic were to most of my friends, and I spent more hours of my young life than I can recall playing the first three games. I’ve practically worn holes in all three of the PS1 discs.

So I’ll be upfront: I have no idea what it’s going to be like for those of you coming into this game with no prior knowledge of Spyro. All I can say is, as a fan, this is the easily the most gorgeous and playable version of him I’ve ever seen, and the version I’d be most likely to recommend to newcomers.

Haven’t you guys ever seen a dragon before?

The Reignited Trilogy is, first and foremost, a cosmetic overhaul. Everything else about the game, from level design to enemy placement, has remained the same in terms of level design. But Toys for Bob has gone out of their way to give the entire game a colorful, cartoonish look that builds on the series’ existing beauty.

The most obvious place to see this is the design of the dragons in the first game. Whereas, in the original, they were very similar-looking models with slight variations in texture or stance, here they’re all distinct, glorious, and wacky. Even dragons who say a simple “Thank you” to Spyro before disappearing get a detailed model with recognizable features. I’ve personally selected Todor from Ice Cavern as my new spirit dragon.

The characters also have more complex reactions, with Spyro being able to show more emotion in a cutscene than a raised eyebrow. Occasionally these tweaks go a little overboard — sometimes, especially in the first game, Spyro comes across as twitchy because the developers just couldn’t let him sit still in a cutscene.

That said, there’s one area where the game somehow manages to improve what I thought unimproveable: the music. The original games called upon the talents of composer Stewart Copeland, and he returns to Reignited with some new music alongside remixes of his original tracks. And the best part? You can switch between the original tracks and the remixes at will. According to IGN, Copeland found his return to the series “incredibly fun and nostalgic.”

The gameplay of the series is almost exactly the same as when the games first came out in the nineties. The first time I sent Spyro charging around the Artisan world in the remake of the first game, I almost teared up with the nostalgia of it all. Those tears were soon replaced by tears of frustration as I repeated the same line over and over in my head: “I don’t remember it being this hard the first time.”

Whether it’s a quirk of the new game’s design, or a feature of the PS1 originals I’ve unconsciously filtered out, the Spyro games go from dead easy to brutally difficult in seemingly random bursts. The hitboxes of enemies and targets are unbelievably small, so you have to be precise when charging and firing off your flame breath. 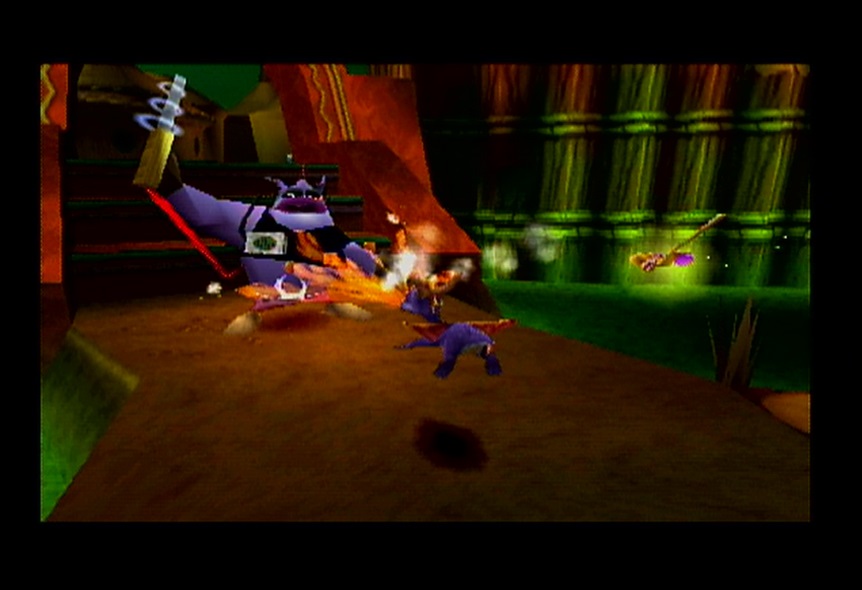 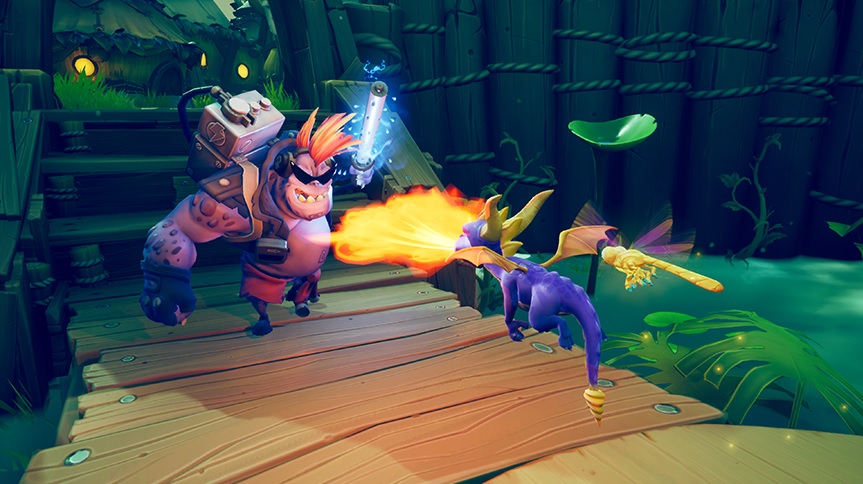 You may dismiss this as the gripe of an aging gamer, losing her battle with entropy (I’m 27, for the record) and choosing to blame the game for it. I might even agree with you were it not for the fact that they’re my eyes and my hands, and I know my reflexes aren’t this bad. Still, once you get into a flow, you’ll find things come more naturally to you.

If I could name one way the remake utterly croaks, it’s the adaptation to the PS4’s controls. You can either control Spyro’s movements with the left thumbstick or the D-pad, and oddly, the D-pad is the more precise of the two. The thumbstick feels, for lack of a better word, sponge-y, and for things such as skating challenges or catching those goddamned egg thieves, sponge-y is definitely not what you want.

For example, if you’re doing a supercharge and you want to make a sharp turn, pulling the thumbstick will result in Spyro making a graceful arc somewhere off the nearest cliff. Meanwhile, pushing the appropriate button on the D-pad will cause him to turn so hard on a dime even an active camera won’t be able to keep up. It’s all delightfully retro, right down to the repetitive strain injury.

The rumors of our extinction were slightly exaggerated

There are a few other things of note: several of the original voice actors return to the remake, the most welcome and notable being Tom Kenny as Spyro. As for the rest, they’re all pretty good — though Hunter occasionally sounds less like his original stoner-ish skater self and more like he got lost on the way to audition for the romantic lead in a Hallmark holiday movie.

Also, the third game keeps the side characters — Sheila, Bentley, Agent 9, and Sgt Byrd — around in all their glory. If you were one of those people frustrated by the fact Year of the Dragon spends so much time making you play as characters who aren’t Spyro, then Reignited‘s lack of polish to their controls will undoubtedly infuriate you (seriously, playing as Sgt. Byrd is like controlling an anemic helicopter). 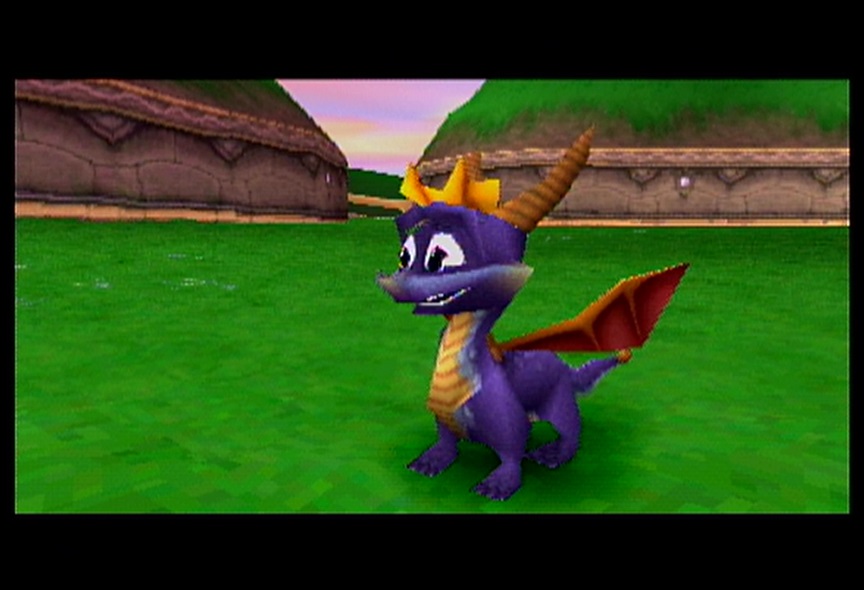 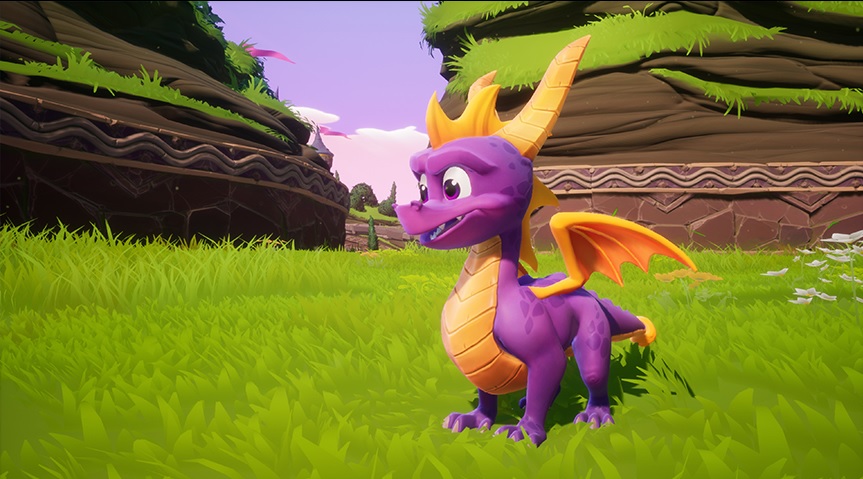 The Reignited Trilogy is pure, undiluted throwback. It’s an hours-long reminiscence on gaming’s simpler days, a note-perfect recreation with a new coat of paint and all the rough edges intact. That’s either your cup of tea or it isn’t.

And if you’re not sure, the game does offer an appealing bargain with three massive games packaged in one. I say take a chance on this trilogy — I think its charm might just win you over.