This article was published on February 10, 2017

Chromebooks are evolving. One of the few kinds of laptop to show strong growth the last couple of years, Google is now looking to move its laptops beyond their traditional role as a quasi-disposable computer.

Announced at CES 2017, Samsung’s new Chrombook Plus ($449) and Pro ($549) are among the first in Google’s new wave of Chrome OS devices, which emphasize stylus usage and convertible form factors – a natural fit for the education market they’ve thrived in. And with full support for Android apps coming to every future device, Chromebooks have never looked better.

I’ve spent the past two weeks using the Chromebook Pro as my primary laptop. It bodes well for the future of Chromebooks, but Google and Samsung still have some work to do before Chrome OS and Android are ready to live in harmony.

Premium Chromebook on the cheap

There are two things that immediately stood out to me about the Chromebook Pro’s design: It’s kind of boring-looking, but it feels extremely well made for a laptop of its price. Everything here applies to the Plus as well, as they have identical designs. One important note: the Pro will be released in a black color at launch. I used a pre-production unit.

All that being said, the silvery aluminum quandrangle I tested is not refined or unique enough to turn heads like a MacBook or Surface, but it feels almost as premium as those laptops. The metal build is mostly devoid of flex; it’s a tiny notch less rigid than some premium laptops, but that can be forgiven with a $449-$549 price tag.

This high-end feel continues to the keyboard, which Samsung nailed – it’s one of the best I’ve used on a laptop of this small and thin. Each key has a a subtle curve that makes typing a little more comfortable and precise. There’s not a huge amount of travel, but the keys are reassuringly clicky and bouncy without being loud. There’s also no keyboard flex to complain about.

The touchpad is about as good as on any Windows laptop I’ve used (aside from some software quirks), though, expectedly, not quite up there with a MacBook. The speakers are pretty good, but I wish they had more volume.

But really, the centerpiece is the gorgeous QHD-ish display, which competes with some of the best I’ve seen in the past year. It has Retina-class sharpness, accurate colors, and strong contrast. The IPS screen shows almost no discoloration or washing out at incident angles. It’s also one of the brightest screens I’ve used recently. Samsung rates it at about 400 nits; given it’s brighter than my Surface Book (about 300 nits) that seems accurate.

The minimal bezels are a rarity among Chromebooks, making the screen seem to be floating above the keyboard, and resulting in the laptop feeling smaller than it should given the screen real-estate. The paper-like 3:2 aspect ratio helps you fit in more text than a 16:9 screen, and is a perfect size for reading and note-taking when used vertically.

It’s hard to tell where Samsung cheaped out on the external hardware; I’d be happy with this device costing over $1,000 if it had the internals to match.

Unfortunately, the rest of the experience isn’t quite as refined. The tablet and Android portions show we’re still in the early stages of stylus and Android integration. How much of these issues are pre-production woes and how many are reflective of the final product remains to be seen.

I should first point out the laptop works wonderfully for a Chromebook’s primary function: browsing the web. It’s responsive and reliable. I didn’t find myself missing my Surface Book, even though when you push it too much, Chrome will have to reload some tabs. It handled 4K video playback fine, so long as you don’t have too many things open.

While I haven’t tested the Plus model, past experience with ARM-powered Chromebooks makes me think it shouldn’t be far behind. In any case, Google tells me the difference should only be noticeable at the extremes of performance.

Sure, some of the OS animations could be smoother, but on the whole it’s a pleasant experience. Chrome OS has been running great on much weaker laptops for years and the Chromebook Pro runs better than most of those.

It’s the new stuff that needs some work.

The stylus experience is solid, but comes with some odd design choices. On one hand, it’s responsive and has a great texture against the screen. Google says it’s using some machine learning tricks in order to predict your movements so writing feels more natural, though it’s not clear whether these were implemented during my testing. I noticed the pen lagging a behind some of my writing, so I’d class it a notch behind a Surface Pen and a couple behind the Apple Pencil. But I’m picky about my styluses and am mostly totally happy jotting away notes on the screen – like I did for this review.

My real problem is that, for some reason, Samsung and Google (like Apple) decided you don’t need a button or eraser on your stylus. I kind of get that for Apple, which sees its Pencil more as an artist’s tool. But given the stylus’ primary purpose on the Pro is note-taking, the omission just doesn’t make sense.

It adds an extra step to erasing and/or selecting text; having to pick a tool from a different menu in every app you use can interrupt your creative or logical mojo. The stylus’ clicky top (as present on the Samsung Note 5 and 7) is fun, but is also bit of salt in the wound, given Samsung had the time to engineer a button but didn’t actually make it useful.

Then there’s the fact that apps don’t seem to detect the pen hovering over the screen, something I’ve come to expect from every device with a stylus. I don’t know if that’s something that will be added in later; Chrome OS rejects touch once the pen is about an inch away from the screen, so it knows the pen is hovering. It’s just not reflected on the screen.

While I could get used to the stylus’ detrimental simplicity – the fact that they will be cross compatible across different Chromebooks is great – Android apps are a bit more hit-or-miss. Having access to the full breadth of Play Store apps is wonderful, and most of the time things perform just fine, but it’s clear Android apps aren’t optimized enough to pass off as native apps yet.

It’s worth noting that the Play Store is still in beta at the time of writing, and will be out of beta by the time the Pro goes on sale in April. Google has also said it intends to fix many of the issues addressed here, but my impressions are a reflection of my experiences so far.

Sometimes the apps are slow. Slack’s mobile app, which works great on my phone and Pixel C tablet, feels sluggish on the theoretically-more-powerful Pro; I decided I was better off just using the web version. Other apps wouldn’t rotate properly. Sometimes they would change from full screen back into windowed mode open rotation. Still other times, the touchpad wouldn’t turn off when I flipped over the screen.

You also can’t resize Android apps other than going full-screen, which makes window management a bit of a pain (this is something Google apparently plants on addressing soon). Some at least give you the option to use them in portrait or landscape mode, but then again others only work in full screen. And many apps simply aren’t optimized for the 12-inch screen size and laptop form-factor.

Nonetheless, I was glad to at least have the option. I spent a fair amount of time jotting notes in OneNote for this review, and it’s nice not having to load everything from a browser. When it all does come together, the Chromebook Pro offers an enticing taste of Android’s future on laptops – and I’d even say it’s one of the better Android tablets you can buy. It’s heavier than most naked tablets, but then most tablets don’t come with an integrated stand, stylus, and keyboard either.

It’s worth re-iterating it’s still very early days, and that these are likely all issues that could be fixed with software updates. I’d much rather have some wonky Android app compatibility than none at all; I just wish it were a bit more polished from the get-go. I also wonder whether the Chromebook Plus might be less glitchy with Android apps due to the ARM processor.

Yeah, actually – assuming the worst kinks are worked out.

I may sound harsh on some of Google and Samsung’s choices, but the Chromebook Pro is still a fantastic value if you’re in the market for a secondary computer – perhaps even if you’re a student buying your first laptop. And assuming the Plus doesn’t have some fatal performance flaw, it might be an even better value for $100 less.

For all my qualms, if Google had never added stylus support or Android apps, the Chromebook Pro would still be a solid option for the hardware experience alone. And though I wish the new features launched with a little more polish, one of the best things about Chrome OS is that the software is always improving; major updates are pushed out every 6 months. 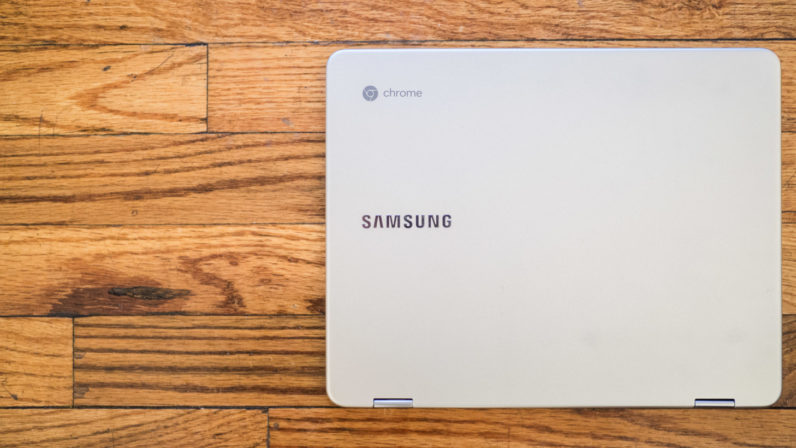 Perhaps the most telling thing about using the Chromebook Pro was how little I missed my Surface Book and desktop while I testing it, and its small size made jotting handwritten notes and using it as a tablet pleasant experience. Granted, it’s not like I was trying to edit video or mine bitcoin on it, but neither will its average user.

Google and partners still have some work to do to bring Android and Chrome OS together seamlessly, but if the Chromebook Pro is a sign of things to come, we’re in good hands.

The Chromebook Pro won’t be released until April, but you can snag the cheaper Plus model starting February 12; you can pre-order it for $449 now.