Fairphone, a small Dutch startup that wants to shake up the way phones are built from conflict minerals, has successfully managed to be the first company to ship a truly modular phone.

The Fairphone 2, which is shipping next week to backers, is the company’s second cut at a phone that’s better for the environment and the people in the supply chain.

This time around it’s tackled fixing those supply chains in a way that tackles the problem head on: consumerism.

Instead of you buying a new device every year, Fairphone wants you to get to know your phone, repair it yourself, and keep it for as long as possible to minimize the use of conflict minerals in your device. The company says that most of the environmental impact your phone has happens during the production stage, so if you use it for twice as long, the impact can be reduced twice as much.

Conflict minerals are materials mined in poor conditions, usually where human rights abuses are rampant in parts of the world that have historically been unstable.

Places like the Democratic Republic of the Congo are commonly used to source these materials, including copper, gold and tin, which have a huge impact on the people involved in the supply chain.

As we wrote in the past, Fairphone is still working to improve on many elements in its devices and has successfully sourced conflict-free tin and tantalum in the Congo for its second cut.

While Fairphone has made some leaps forward in securing more conflict-free materials and improving factory conditions, it believes it can make more impact as it continues its work by making the devices themselves last longer.

Fairphone 2 is the first truly modular phone on the market, beating even Google’s Project Ara to actually going on sale. Ara has remained a pipe dream that’s always a little further away while Fairphone has actually delivered on the vision.

This device, however, is modular in a slightly different way: you can repair it yourself, but the components aren’t hot-swappable like in Google’s vision of the future.

The big question remains, though: can Fairphone make something that everyone would consider buying?

When you look at the Fairphone 2 for the first time you’ll probably think it’s decidedly unexciting and relatively unattractive.

It looks, on first impression, like a boring phone — until you realize you can dismantle the entire thing.

The case around the edges of the phone is rubber, and removable fairly easily. Getting it on snug is a little more difficult, however, as it takes getting the lip of the case slotted around the screen just right.

A range of colors will be available for purchase in the future and can actually be entire peripherals themselves, thanks to a small group of pogo pins on the back of the device.

Fairphone sees this as a way to extend the functionality of the device in the future to add NFC (since it’s been omitted from the device), or perhaps something like a solar-charging back which is an attractive proposition — if case builders embrace it.

Underneath that case is where it gets exciting, though. On the bottom of the device are two clips that make it easy to slide the screen right off the device in a few seconds, no screws required.

From there, you can get to the guts of the Fairphone, which are all user-serviceable in less than a few minutes. Each component is clearly labeled, and only takes a handful of screws to replace.

Those parts are available for purchase directly from Fairphone. Each component can be individually purchased, and the cost of replacement is surprisingly reasonable — €87 for a screen module, versus more than €100 if you broke your iPhone.

In the future, you should be able to get upgraded parts with better specifications, though it’ll be interesting to see if that actually pans out.

That’s attractive because it gives you a sense of ownership over the phone. Instead of hiding from those that like to self-repair, Fairphone is encouraging you to break it open and play around.

That’s a rarity, and one that iFixIt gave the company a 10/10 repairability score for, since you’re basically able to replace the majority of the device yourself. To contrast, LG’s G4 received an 8/10 and the iPhone 6 Plus scored 7/10.

Yes, Fairphone 2 isn’t the most attractive phone around but at least it’s got a reason for it.

The specifications the Fairphone 2 ships with are fairly standard for a mid-range phone. It’s got a 5-inch Full HD display, 8-megapixel rear camera, 32-GB internal storage, a 2.26 quad-core Qualcomm Snapdragon 801 chipset and 2 GB of RAM.

What sets it apart from the majority of mainstream phones is that it has both expandable storage via a MicroSD slot and Dual SIM support. That’s particularly great for emerging markets, which should broaden the appeal for the device.

It weighs in at about 168 grams with the case on (the iPhone 6s is 129 grams) and is a little on the thicker side at 11mm thick, to allow for that swappable case.

The size and extra weight of Fairphone 2 are excusable considering what’s in play here, since it’s needed to facilitate the ability to fix it yourself.

Let’s get this one out of the way first: Fairphone 2 is running Android 5.1 Lollipop, not Android 6.0 Marshmallow, which is slightly disappointing.

Fairphone says that’s because the chipset used in the device doesn’t support Marshmallow yet and it’ll work on it as soon as it’s able to… but it’s still a big shame that a brand new device didn’t come with the freshest version.

Android that comes on Fairphone 2 is pretty close to the stock experience, with a few small tweaks. First, the launcher has been customized to feature a quick slide-from-side action to open apps.

You can drag with your finger from the right-hand side of the phone to access a customizable list of apps for quick launch, but I found myself preferring the older way of just opening the app drawer — at least you can replace the launcher if you don’t like it. 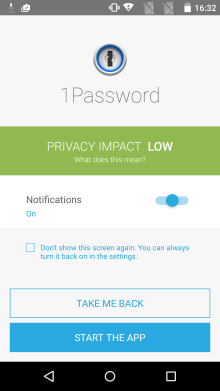 Whenever you launch a new app, the company warns you about the level of impact installing said app will have on your privacy based on the access it’s asking for.

You have the opportunity of backing out before launching, or reading more about why the app was given the rating.

The idea is to help raise awareness of the impact of each app on your data, since many Android apps historically required some scary, unexplained permissions to do seemingly basic tasks.

It’s a nice touch for those that might not otherwise know, considering Android isn’t exactly the best at actually telling you what’s really going on behind the scenes.

That said, Privacy Impact would matter less if the device shipped with Marshmallow, which allows control over each individual privilege given to apps.

There are only two other bundled apps on the device — an FM radio receiver, which is great for developing countries, and the iFixIt app so you can get instructions for how to fix the device if you break it.

Fairphone bundled a bunch of wallpapers spotlighting the work it does in the supply chain, as well as a cute charging mode that shows a transparent version of the phone’s guts.

One of my favorite smaller features is a lockscreen widget that shows you how much ‘peace of mind’ you’ve had — how long it’s been since your screen was last turned on. It’s a small touch, but a nice one, that makes you more aware of just how much you’re using your phone.

Otherwise it’s Android as you know it, which is a nice change of pace from other heavily-customized devices.

Earlier this year when Fairphone showed us a prototype of its new device we wrote much about how the company is pushing to make an impact in the supply chain, even if progress is slow.

Fairphone’s work in these regions is admirable, but is a long, slow road, which is why the company chose to create a device with a longer lifespan, to lessen the impact on the supply chain.

Other companies, like Apple, are making big inroads in this area too, as they push to win over consumers that care about how the supply chain affects people and the environment.

Apple, however, wants you to replace your phone every year and goes to great lengths to get you to do so, now offering upgrade plans that will replace it annually for almost zero additional cost.

Fairphone’s biggest leg up is that its hardware is built outlast everyone else’s. The big question mark for Fairphone 2 is if that angle is enough to sell the device to a wide audience — that’s still unproven.

As it stands, it’s a middle-of-the-market phone that’s beat on specifications by cheaper devices, but Fairphone comes with a price tag of €529.

That’s a hefty price, which is partially offset if it lasts you longer and you’re able to repair the device on your own. Do people care about the repairability angle? Time will tell.

Having a modular phone, however, does feel truly futuristic, and it’s pretty cool to be able to whip off the covers and mess around with the insides.

It reminds me of when I got my first computer and could pull apart the insides to figure out how they worked. It’s an ode to the past, where you could repair your own property to make it last as long as possible.

The new Fairphone is a device you care for if it’s broken and fix it, instead of casting it aside.

Fairphone is being transparent about how much the individual parts of the device will cost. A new screen module will run you €87, audio module for €27 or a camera module for €35, all of which will be available from Fairphone directly.

Because you can repair it yourself, Fairphone is betting that it’ll give you a sense of more intimacy with its phone, and it may well be right. It’s exciting to be able to crack the phone open and not worry about breaking it, and makes it feel like you can control your own destiny if it breaks.

My biggest concern here is how long those parts will be available. As Fairphone inevitably marches toward its next phone, will it keep the parts available for a long time? Will upgraded parts become available years into the future? That’s one big question mark, though it’s still better than your chances with HTC, LG or Apple.

One opportunity that’s immediately apparent for Fairphone to sell into is aid agencies, or even the United Nations, who could be well positioned to embrace a device that’s better for the environment and lasts longer.

Those groups work constantly in areas directly affected by conflict minerals and using Fairphone would mean they’d be putting their money where their mouth is. Fairphone’s work actually nabbed an award at the Momentum for Change event during the Paris COP 21 summit last week.

If you care about the insides of your phone, the impact it has on the environment and buying something that could, theoretically, last you five or more years, this is the phone for you.

It’s a glimpse of a bold new future where companies aren’t fighting to lock you out of your own devices, and I hope it’s a trend that continues.

You can order Fairphone 2 today for €529.38 and it’ll arrive in January, but at time of writing it’s only available in Europe.