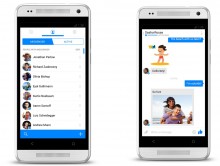 Last month Facebook began testing a new version of its standalone Messenger app for Android that integrated phone number-based messaging and notifications for active Messenger users, and today the update rolled out “more broadly” to Android and iOS users.

The update brings a new look and feel — including a redesigned logo — and a Messenger icon to indicate which contacts are logged from the standalone Messenger app. It is also possible to communicate with people who are not friends using only their phone number, once a user has registered their own number first.

The move to double down on new “mobile-to-mobile” messaging features comes as the chat app space continues to grow at pace. Market leader WhatsApp has more 350 million active users, while Asian apps like Line (which is approaching 300 million downloads) are also blossoming and remain more feature-rich than Messenger.