We get pitched a lot of photo apps here at TNW, so it’s always nice when one stands out for offering something different to the rest. That’s the case with KlikToo, an iOS app launched today that lets users capture real-time moments with friends and complete strangers and stitch them into one image.

The basic function of KlikToo is to create merged photos of smartphone snaps taken by at least two people.

“The app is about bringing together friends and strangers to capture multiple perspectives of a moment in time,” Muh Hon Cheng, one of the founders of BuUuk, the Singapore-based company behind KlikToo.

Hon Cheng is one half of the team behind Dispatch, my favorite iOS email app, so he has great credentials. 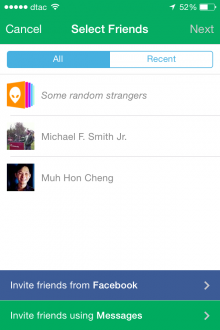 You start by creating a new event and then inviting friends who have installed the app to add their photos. You can find friends already using KlikToo, or invite others to download it via Facebook and SMS.

There is a twist though, since you can also invite other KlikToo users — read complete strangers — to your event.

One more caveat: there’s a time limit on adding snaps. You have just 50 seconds to take your photo and upload it. Hon Cheng explains that deliberate barrier is to keep things fresh and spontaneous.

“We don’t want to be an Instagram for stitched photos. Time is something we want to emphasize, the aim is capturing photos from multiple perspectives at a single moment in time,” he says.

Once all the photos are gathered, KlikToo gets to work to create a single image (stitch) of them which can be shared to Twitter, Facebook and other social networks.

My initial plays with a group of three were quite interesting. They featured me working in my flat in Bangkok, someone in a coffee shop in Singapore, and another on the road moving house from Thailand to Singapore. It offered a glimpse into the lives of people I know that I would probably not see using a messaging app, or other services with ‘staged’ photos, such as Instagram.

Some KlikToo events include photos for more than 10 people, which is where the service really gets interesting. The option to add random users who you don’t know is reminiscent of Jelly, the app from Twitter founder Biz Stone, and can throw up some interesting responses.

Hon Cheng says that the team is planning to add a private timeline feed. Right now the public timeline is the default view.

The team may also increase or decrease the time limit in response to how it is used. For now though, the most important thing was to ship the app and make changes later, Hon Cheng says. That’s always a great attitude to hear from developers.