Ken Segall served as Apple’s agency creative director under Steve Jobs from the NeXT years on through, including some years under John Sculley’s disastrous reign. Now he’s written a book, called Insanely Simple: The Obsession That Drives Apple’s Success.

It looks like a fascinating look at what many consider to be the defining value of Apple’s design philosophy: simplicity.

The entire preview is worth reading, and you can do so over at Segall’s site here. But this passage, in which a product packaging team has had a rough meeting with Steve, stood out for me:

While the team was decompressing after their Steve meeting, I crossed paths with the project leader in the creative group’s kitchen. “The suspense is killing me,” I said. “How’d it go this morning?”

“Well,” he said, “Steve hit us with the Simple Stick.” 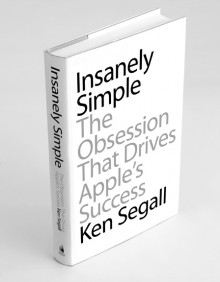 Translation: Steve had rejected their work— not because it was bad but because in some way it failed to distill the idea to its essence. It took a turn when it should have traveled a straight line.

In this case it hadn’t even been t he creative effort that bothered Steve—it was the project itself. h e person leading the project had directed the team to create packaging for two versions of the same product. Steve had decided this was brain- dead. “Just combine them,” he said. “One product, one box.” There was no need to explore the idea of a second package.

He was right. It was simpler, quicker, better. The conversation was over in minutes, and it left one very smart and talented group of people wondering why they hadn’t thought of that before.

The Simple Stick symbolizes a core value within Apple. Sometimes it’s held up as inspiration; other times it’s wielded like a caveman’s club. In all cases, it’s a reminder of what sets Apple apart from other technology companies and what makes Apple stand out in a complicated world: a deep, almost religious belief in the power of Simplicity.

The book will be available starting April 26th, but is available for pre-order at iBooks, Amazon, Barnes & Noble, IndieBound and 800-CEO-read. The full 11-page preview is linked in Segall’s post here.