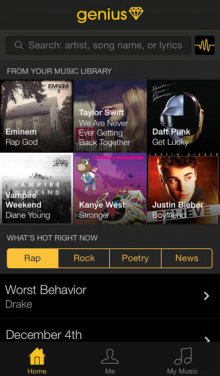 Rap Genius, the service that allows users to view, annotate and discuss the meaning behind song lyrics to their hearts’ content, has just released its first app for iOS devices, called simply Genius.

With Genius, users can get lyrics for any song that’s currently playing, has recently been played, or any song stored in their iTunes library, and it’ll allow for playback of the track while reading the lyrics on the same page. It also provides Shazam-style track recognition to identify which track a user is listening to and show the accompanying lyrics on-screen.

While it certainly took its sweet time to arrive, Rap Genius first launched back in 2011, it’ll no doubt please fans of the service to finally have a native iOS app. There’s no word on an Android app yet though. The decision to call the app Genius, rather than Rap Genius, is likely a move to allow for the potential to discuss and annotate non-musical content in the future.