This article was published on November 20, 2011

In New York, anyone can get involved in the tech scene. There’s just one requirement: You have to passionately love the Internet and its seemingly infinite possibilities.

In the last year, we’ve witnessed a movement across New York City’s many industries; in fashion, media, commerce, advertising, finance and information technology, there’s a growing community marked by its altruistic support and urge for collaboration. The momentum is tremendously exciting. And once you realize you’re contributing, you feel grateful; you feel proud.

Oftentimes a movement is marked by a few, very special moments in time. The kind that make you want to shout out, “This is awesome.” Raise Cache, an event celebrating New York’s tech scene was one of our city’s awesome moments of the year.

As of today, Raise Cache has raised $103, 789.22 for hackNY, a non-profit that nurtures the next generation of New York’s hackers with frequent hackathons and a fellows program. $21,658 of that cash was raised through Skillshare’s Raise Cache Education Series, which featured 25 classes and 744 students.

The goal for Raise Cache since the beginning was to shine a spotlight on the emerging talent and disruption in New York. By partnering with hackNY, Raise Cache has allowed the whole community to personally invest in the next generation of innovators, creating an amazing buzz which has transcended the one night of fun and glamour, to not only cement the city’s reputation as a hub for technology but also ignited an exciting new wave of activity in the scene. I feel so deeply blessed and humbled by the support of all the models, sponsors, participants of Raise Cache and the 1,500 attendees that took us over the $100,000 mark for hackNY. I am truly excited to see what the future holds for NY Tech.

The event was one part fashion show, one part benefit, one part education series, one part DJ competition and all parts party. But feeling how genuinely proud everyone felt to be in the NY tech family was the most moving part of it all. Oh, and seeing all of your colleagues get their hair and make up done (including the gents)? That was highly entertaining; it was like prom for grown-up geeks.

“If you would’ve told me a year ago that the NYC tech community would host a sold out fashion show and raise $100k in one night I’m not sure I would’ve believed it, but being there, seeing the community come to life to support one another was positive proof that something special is happening in New York.

-Will Hutson, Director of Social Activation at Carrot Creative

At Raise Cache, there was a sense of community created by having nearly everyone in the NYC tech scene in one place, in a celebratory mood…For me, it was a lot like being at my wedding and looking around the room and thinking ‘wow, I’m so lucky to have so many wonderful people…

-Bryan Birsic Entrepreneur in Residence at Village Ventures in NYC

…This merger of entrepreneurship, fashion, and venture capital is a perfect example of how technology flourishes in New York by invigorating and electrifying the city’s existing industries. And I’m really excited about what HackNY is doing to transform the city’s economy — New York needs it!

McCarthy walked down the runway in Stylecaster and Chloe & Isabel with a slew of high-heeled and dress shoe wearing enthusiasts including the AVC Fred Wilson (who cat-walked with an Occupy sign), TechStars’ David Tisch, Rachel Sklar of Change The Ratio, Reece Pacheco of ShelbyTV, Alex Tryon of Artsicle, Brooke Moreland of Fashism, Christina Cacioppo of Union Square Ventures, Nikhil Kalghatgi of Softbank Capital, Katia Beauchamp of BirchBox, yours truly and many, many more. (Click here for a full list of designers and models.) 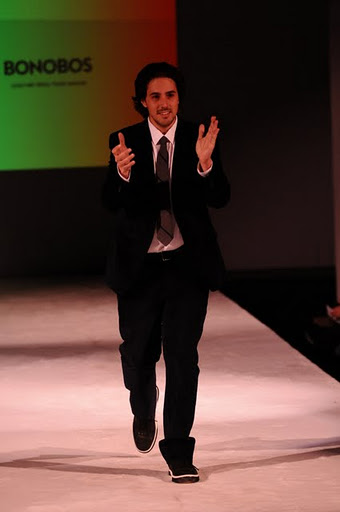 Raise Cache was amazing. …Anyone who can get [TechStars’] Dave Tisch (pictured right) to wear a suit can move mountains. Beyond raising money to nurture tech talent in New York City, Raise Cache brought so much of the New York tech community together in a way that doesn’t happen very often, particularly at that scale…

When Bloomberg TV turned the TechStars incubator into a reality TV show earlier this fall, people questioned whether entrepreneurism and tech startups should be glorified like celebrities. The same could be asked after the Raise Cache event. “Is it weird that you run a company and suddenly a gaggle of doe-eyed 22-year-olds are reaching out to you on Twitter, telling you how great you looked on the runway and asking you out to coffee?” I asked one entrepreneur.

“Yeah, it’s really, really weird,” he says laughing. “And I don’t have time to get coffee with them, I’m running a company!”

Is it our prevalent fashion and media influences that make NYC’s tech scene so fun to celebrate? Probably. But in the end, there’s nothing terribly wrong with glorifying entrepreneurism here. As a city, we’re still petrified to keep moving faster and keep doing better. New Yorkers have always been known to burn the candle at both ends.

Tom Loverro at RRE Ventures in NYC writes about what made the event “unabashedly New York”:

“…My point is not that last night’s event couldn’t have physically happened in the Bay Area. Of course you could find hundreds of folks in SF to get together to celebrate tech, but it would have been different. Different is neither good nor bad. Different is New York not trying to be “a mini-Silicon Valley” (something we are often accused of) which we would surely fail at. New York now has its own tech thing going on. I think this means NY will evolve on a completely different and new trajectory from the Valley. The rules and specific ingredients required for the Valley’s growth and the characteristics those produced do not need to be replicated in NY. Just like Facebook did not follow HP’s path from garage to IPO, New York doesn’t need to follow the Valley’s path from fruit orchards to tech Mecca.

The New York Tech Scene has not only arrived, but it is different and it is defining its own trajectory. It is characteristically and unabashedly New York.”

Let the lawyers and the financiers have their giant offices in high-rise buildings. Let the protestors occupy whatever they please. Meanwhile, New York City’s tech scene is not an alley, a valley or a roundabout. It’s an exciting adventure of entrepreneurism. It’s a story of small business culture. And Raise Cache will undoubtedly get its own chapter when the book is written.

Official Event Photography was done by: Thre.ad. To make a donation, go to: cacheforhackny.