Now, I often talk about loving simple apps that offer only one or two features, but do them very well. Sometimes I feel like a broken record on this front, but an excessive number of features can often detract from the overall experience. However, this next app takes simplicity to a whole new level.

How many times have you spotted a golden Kodak Moment, only for your fumbly fingers to fail you as you reach to access the camera on your iPhone? Rather than capturing your newborn’s first smile, what you actually capture is a vomit-induced grimace from your young ‘un. Not pleasant. But QuickShot is one app that promises to help you avoid such situations.

Although there is a plethora of easy-to-use camera apps out there, they pretty much all at least require you 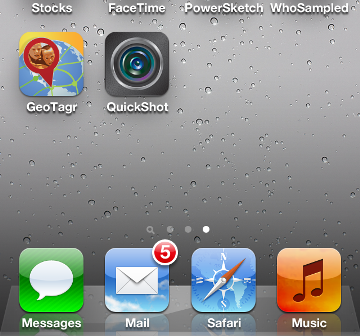 to launch the app to use them. This is where QuickShot differentiates itself – you don’t launch it, and by clicking on it you can’t change any settings or tweak it to suit the light conditions. For all intents and purposes, it’s just a mystical icon on your screen, but we can assure you, it is an application and it does take photos.

When you touch the icon, the app seemingly does launch, and the picture is taken instantly, but it closes before you’ve even had the chance to figure out that it has opened. It’s more like the shutter on a camera opening and closing.

To view the photos, you simply go to your main photo gallery. Now, you CAN change the configurations for the app, but you have to access it through the main Settings conduit on your device, where you can alter the photo size, shot count, sound and auto-focus settings.

We’re sure QuickShot will appeal to many folk out there, and it will perhaps work best when the app is placed on page one of your main homescreen. After all, every second counts…