Quicket sells itself as a multi-purpose mobile app that wants to be a “one-stop-app for all your travel needs,” letting you search for and book flights anywhere in the world. But with its latest update for Android and iOS, it’s introducing a Facebook seat check-in feature, letting you see who’s going to be sitting where on any given flight.

This is similar to the technology SeatID has offered airlines for a while already, but Quicket is looking to take the concept direct to consumers. So the idea here is that you can see in advance who is sitting where – but of course this relies entirely on others on your flight using Quicket, which will make this feature redundant in many respects, certainly until Quicket garners more users. 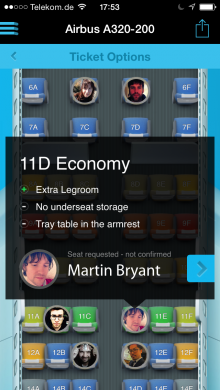 However, there may be other use-cases for the app beyond getting a heads-up on who’s sitting next to you. For friends or business colleagues who are spread throughout a plane, you can see where everyone is based and try to make seating rearrangements accordingly.

So assuming others on the flight have checked in through Quicket using Facebook, you can click on their avatar and also view their social profile if they’ve permitted that.

You can grab the refreshed Quicket apps now. Meanwhile, check out the Quicket promo skit below.