With the death knell ringing ever-louder for Google Reader, the July 1 curtain call has already kicked a number of companies into action as they vie for the massive RSS void left by this closure.

While Feedly is already directly benefiting, Digg too has also thrown its hat into the ring as it plans to build an RSS app with the best of Google Reader’s features. Last month, another Web-based service opened in public beta called Ping.it, offering an interesting feature called ‘Probes’ which lets users create very specific feeds based on keywords and popularity.

Now there’s PushPing, which has been available for iOS and Android for a while already, but it’s now pushing out a big update which has seen it rewritten and redesigned from the ground up. This update lands on iOS first, with the Android incarnation to follow within a couple of weeks. We thought we’d take a quick peek behind the scenes.

PushPing is built around ‘notifications’, which are the individual feeds, or ‘stories’, from publications you’ve subscribed to. So when you first launch the app, this will be empty until you start subscribing.

The main menu area is where you start building your subscriptions – which it actually calls ‘Taglines’. You can either peruse the ‘featured’ area, which has a random selection of publications to get you started – such as BBC News, Telegraph, CheapFlights or The Next Web. But it’s ‘Search’ where the main RSS-building takes place.

In here is a list of categories starting from ‘Automotive’ and running all the way through to ‘Wedding Services’, via the likes of ‘Shopping’, ‘Technology’ and ‘Sports’.

For launch, there isn’t an actual manual search option, so you’re restricted to the publications offered by PushPing. In an ideal world, you’d be able to search for any publication on the Web and sign-up to their RSS feed, though we’re told such a feature should be arriving in a later iteration.

Once you’ve subscribed to a number of feeds, ‘Notifications’ is where you catch up on your news. PushPing takes each article and converts it to its own notification, so you actually read each article within the app itself, rather than being redirected to their site. You can scroll up/down your notifications, with the most recent appearing at the top and, within each article, there is actually an added option to read the article on the original site by clicking ‘more information’.

This is something of a misnomer, however, as it isn’t really ‘more information’ at all – all the information a user needs has already been scraped into PushPing, so this feels a little like they’re trying to cover their backs from accusations that they’ve created silos of other people’s content.

Also, the PushPing folks have developed a content follower system that reels in articles, but keeps out marketing or other information not related to the item they receive – in this case an article. So it seems like they’ve taken it upon themselves to block ads (by not including them and pulling in full articles rather than snippets) that companies need to ‘monetize’, and replaced it with a different approach that will see them pay PushPing to offer more targeted content to the readers.

“Articles can be driven to users and their requirements captured, and then the marketing articles/banners that would normally be shown on the site, can be sent as a targeted notification,” explains Paul Ashford Managing Director and Co-Founder at PushPing.

“I don’t want a notification about IBM laptops but would be interested in reading one about a discount on a Mac Book Pro,” he continues. “On the Web, you don’t have any knowledge of users’ needs, and click-throughs do not turn to sales very easily. Marketing on the Web is like ‘cold-calling’, eventually you will make a sale but having a prepared list that is focused and has a warmed audience will convert sales and product leads ten-fold.”

This leads to the other side of the PushPing fence – its publisher-focused product. PushPing offers publishers an online portal that lets them tweak their taglines, add new content, gain access to an RSS testing tool and, ultimately, offer special deals and discounts. What we’re talking here is ‘targeted’ messaging, backed by reader statistics. For this service, PushPing charges £250 a year (around $400). 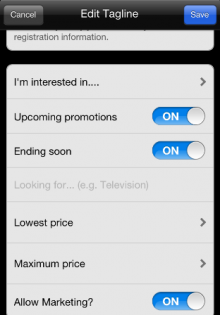 Within a subscription, a user is able to edit their preferences and answer questions set by the publisher through their online portal, such as whether they’re interested in upcoming promotions and so on.

Ashford says this “nominal” charge is made not as a money-maker, but to stop any old company signing up and spamming the subscribed users. Whether that actually happens or not, remains to be seen.

Publishers can send specific ‘events’ direct to a user’s PushPing account, which can include a calendar invitation, location, dates and times. This will appear via a push notification on a user’s handset.

All messages use Microsoft Azure’s technology, so companies can schedule messages to be delivered at a certain time and even make them ‘float’ so that new subscribers will receive the message on subscribing to a tagline (publication).

So as we dig, it seems PushPing is more than an RSS reader – it’s really a glorified marketing tool. I’m not meaning that as a negative thing per se, it’s just that this causes a problem. For publishers to get fully on board with such an app, it needs to see that there’s a lot of people using it – and given the plethora of existing news aggregrators (Pulse, Flipboard) and RSS readers (Feedly, Digg) I’m not sure it can get that traction in the first instance.

Other interesting updates coming soon include location-aware features, for users to find content that is ‘nearby’; so this may include stories that are about places and things close to where they currently are. Certainly, if PushPing is to gain traction, it will have to continue to focus on the consumer product as much as possible. Given that it launches simultaneously with the publishers’ back-end promotional product, there is always a danger that this won’t happen.

PushPing, optimized for iPhone, iPod Touch and iPad, is available to download for free now.