Proven is on a mission to bring the job hunt to mobile, and it is beginning to see success with both employers and candidates.

The candidate app, which is available on both iOS and Android, helps notify job hunters when positions they’re qualified for crop up on Craigslist and SimplyHired, and then quickly send off an inquiry with a cover letter and resume attached. The app for employers (iOS and Android) lets decision makers post jobs to Craigslist and then manage and sort candidates as they respond. 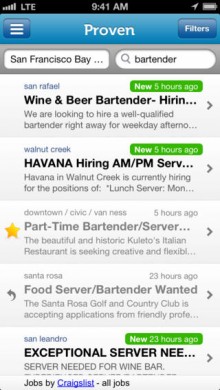 To be honest, looking for work isn’t an activity that I would naturally do on a mobile device. I’ve always envisioned the process as one that’s performed hunched over a desktop or laptop with a cup of burnt coffee in hand. However, Proven founder Pablo Fuentes told TNW that, when he got out of the office and talked to seekers, many of them responded that they do use their smartphones to look for work.

Proven didn’t start out aiming to build mobile apps for employer and candidates. Fuentes founded the company in 2009 while at Stanford Business School with the aim of using text messages to help people get jobs. The startup eventually pivoted into a staffing agency before almost running out of cash in 2011.

Fuentes then changed course yet again and began building the Proven apps. The service is especially popular among administrative, food service and hospitality, retail and healthcare businesses and employees.

In that sense, Proven operates in a different part of the job market from LinkedIn. By way of comparison, Fuentes claimed the average job turnover for LinkedIn users is 6-8 years, while Proven users find new positions roughly every 12-18 months. Job candidates using Proven are part of a more mobile workforce that moves between jobs regularly, so looking for work on mobile devices has turned out to be a good fit for them.

Earlier this month, LinkedIn introduced the ability to apply for jobs on its own mobile apps, noting that 30 percent of its users view openings on a mobile device. Rival Indeed.com also allows users to apply for jobs directly from within its apps.

Proven’s ability to help candidates find and apply for jobs just minutes after they appear on Craigslist offers a significant advantage to its users. On the other side of the process, Proven’s employer tools help managers quickly flip through the list of applicants and surface better candidates. Prior to the arrival of the mobile employer app, Proven offered a Web version. 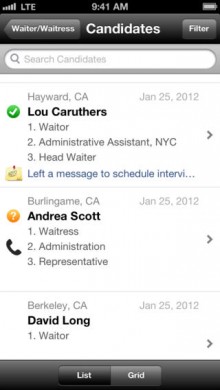 Rather than view Proven as competing with other job search services, Fuentes see the company as vying with other mobile apps, such as Angry Birds, for people’s time.

“We want to make people think about their job search when they’re just hanging out,” he said. “We want to be the de facto way for which people apply and hire using a mobile device.”

Thinking about a job search while hanging out actually sounds kind of stressful when I think about it, but I blame that sentiment largely on my own archaic habits. Moving to mobile devices represents a foundational shift in the accessibility of information and resources in virtually all fields, including the hiring process.

Currently, Proven boasts 150,000 monthly actives and nearly 500,000 downloads of its app. Fuentes wasn’t able to share exactly how many people have found jobs through Proven, though he did mention he’s received plenty of success stories from users.

Proven currently makes its money off of affiliate traffic on its candidate app, but it’s also planning to introduce premium features for employers at some point.

The mobile job search market is still getting settled, so Proven still has a ways to go before it’s secure in its position, but it’s definitely proving the concept.