For developers, having or not having a press kit can be the difference between tons of coverage and zero attention. This is why it’s so important for creators to make major details, photos, quotes, etc clear and readily available to the press. The importance of this cannot be overstated.

But even though many of these things are standardized, it’s easy to forget when PR isn’t your job. After all, you’re in this for creating, not marketing. To help resolve this problem, Rami Ismail of Dutch independent game studio Vlambeer created Presskit().

Presskit() is aimed specifically at game developers but flexible enough for anyone launching a product. It makes creating a comprehensive press kit as simple as installing a service like WordPress. In fact, all you have to do is upload a PHP file, follow a few instructions and you’re good as gold. The team says it only takes thirty to sixty minutes to complete everything — this will be worth your time. Plus, it’s free. 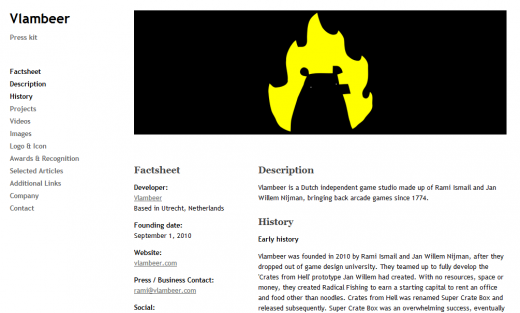 A pristine press kit won’t turn a terrible game or product into something worthwhile, but it will help creators tell their stories to the people that need to hear it. More, from Presskit():

Developers & press both have the same goal: to bring great games to as many people as possible – after all, a good game is worth nothing if no-one plays it. For the press, finding out about a game but not having access to information & media for the game means that they can’t write about it. Of course, developers want to spend their valuable time making games instead of press pages.

presskit() (pronounced ‘do presskit‘) is the solution. Free for everyone, open and easy-to-use for both developers & press. Developers only have to spend an hour or so creating well-laid out press pages with everything the press needs to write to their hearts desire. Everybody wins.

The project is still in beta, but it’s already a promising initiative thanks to the help from contributing game developers and writers. Visit the link below to learn more and snag a free download.