Location-based mobile game Pota-Toss is now available in beta in Latin America, its parent company Saborstudio announced today during TNW Conference Latin America. A DreamIt Ventures alum, the startup is also one of our Start-Up Battle finalists, and it took the opportunity of its on-stage pitch to unveil its next game, Antsquare.

As you may remember, Pota-Toss actually started as a Kickstarter project in November 2011, quickly catching public attention while securing 213% of its initial fundraising goal. After six months working on development, its team is now on track to fully launch the game next October for both iPhones and iPads.

The main focus of Pota-Toss is location awareness. While it based on the classic Windows 3.1 artillery game Bang Bang, it brings a new twist to the concept that goes well beyond its potato-shaped characters.

As a matter of fact, Saborstudio is convinced that after mobile, touchplay and social, location is the next big thing for gaming. This led it to fully integrate location into Pota-Toss’s gameplay.

In practical terms, it means that the game includes real world scenery by taking advantage of GPS, combined with its library of geographic content.

Interestingly, the team behind Pota-Toss is quite small –  as Costa Rican 3D designer José Cayasso and developer Phillipe Casorla developed the game all by themselves. 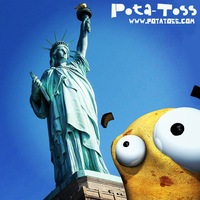 As the pair points out, this will make it easier for Saborstudio to make profit from its games, which are monetized through in-app purchases and in-game ads.

Location awareness indeed represents an interesting feature when it comes to advertising, as Saborstudio will deliver banners that blend in with the game itself.

After completing its acceleration cycle in NYC, the company is currently raising a $500k round of funding, of which it has already soft-secured one fifth. “Billboards and sponsored buildings are examples of how location-based games can also disrupt the mobile ad industry,” the team explains. So far, it has already pre-sold almost 100 ad billboards for Pota-Toss’s launch version, it says.

As for Antsquare, it will be a time-management game where the user manages a living ant colony and is required to physically visit venues to gather resources for their ants. In addition to region awareness, the app will also be venue-specific thanks to Foursquare API for Games.