At Sony’s PlayStation showcase event earlier this month, developer Ready at Dawn hosted a gameplay demo for its upcoming The Order: 1886 PS4 exclusive. With its Neo-Victorian London setting, the game certainly looks promising, but the studio is taking plenty of risks with the game.

The Order: 1886 follows a squadron of knights in an alternate history of 19th century London that reimagines high-tech weaponry with Industrial Revolution parts. The Order is tasked with protecting humanity from hybrid monsters, but it will also have to face an uprising from London’s poor citizens.

Ready at Dawn CEO Ru Weerasuriya, who’s acting as creative director on The Order: 1886, described the project as focusing on “moment-to-moment gameplay.” Cut scenes are designed to have occasional interactivity, such as tapping a message in morse code to an ally, and then flow directly into gameplay.

The studio said it has been working on the story and setting since 2006 in hopes of creating an original franchise. Gameplay development and story integration began in 2009.

From what we’ve seen, The Order: 1886’s setting manages to be imaginative while still grounded in history. The combination of Arthurian legend, the grittiness of the Industrial Revolution and the reverse-engineered technology should combine for a fascinating playthrough.

Weerasuriya noted that the team has been careful to do its research even as it takes liberties with the alternate timeline. Ready at Dawn collected over 150GB of data on a research trip to London. Still, The Order: 1886 isn’t afraid of a few anachronisms to make the game more fun. Dirigibles, for instance, will play an important part in the story, despite not having existed in actual 1880s London. 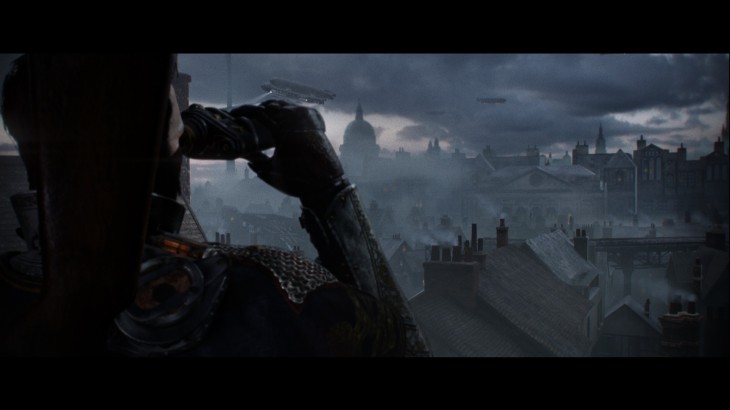 Ready at Dawn has made it clear that The Order is not a steampunk game, but the title’s creative weaponry certainly looks steampunk. Weerasuriya claimed that the individual parts of each weapon existed during that period in London.

“It’s the whole that’s not real. That was the fun part for us. We didn’t want to make sci-fi stuff,” he said,

Cinematic games are a current trend, but that’s not always a good thing. Games like the Xbox One’s Ryse: Son of Rome can get too focused on set pieces and epic moments at the expense of gameplay.  Ready at Dawn took a different approach by designing the game with filmic camera angles and lighting in mind. Weerasuriya reassured that the team spent extra time ensuring that the technique doesn’t detract from the overall game experience.

One interesting aspect of the game demo was the use of branching quick-time events for melee combat. The gameplay is designed so that hand-to-hand fighting follows branches of a tree based on your actions, successes and failures. You’ll have multiple choices for how to react in different scenarios, and certain decision flows will result in complete failure. It’s understandable if you’re wary of anything that involves quick-time events at this point, but at least Ready at Dawn is trying to come up with a better solution.

The Order: 1886’s single player-only status falls on the opposite side of the spectrum from titles likes Titanfall that are abandoning the single player campaign to go online multiplayer-only. Both modes of play have their merits, but it is disappointing not to have a chance to take out a friend online with all those fancy new guns. Still, I’m glad to see that Ready at Dawn is going all-in on the storyline, as I’d rather see a fully-developed campaign than two half-baked game modes.

Seamless cinematic transitions, film-like camera angles, branching quick-time events and single-player only could combine to make a captivating experience of The Order: 1886, but they could also derail the game if implemented poorly. We’ll give Ready at Dawn the benefit of the doubt here and keep looking forward to the game’s release later this year.