Stripe now supports it, as does Square. Gaming behemoth Zynga is taking notice, while some companies have even offered to pay staff salaries with it. This thing even has its own ATM. We’re not talking cash or even gold doubloons though. We’re talking Bitcoin, baby.

Cryptocurrency is based on the concept that cryptography is used to manage a currency’s creation and subsequent transactions, as opposed to the status quo which sees centralized authorities take the helm. It’s fair to say that such virtual currencies have soared in recent times, with Bitcoin very much the poster child of the fledgling peer-to-peer digital payment system. But what exactly does this new-fangled currency system mean for everyone? Is it a fad, or can it revolutionize an industry that’s become synonymous with wealth, power and greed? 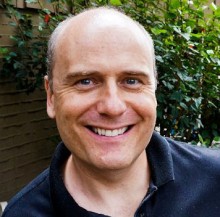 Meet Stefan Molyneux, the podcaster, broadcaster, philosopher and host of Freedomain Radio. Molyneux is one of the speakers at the TNW Europe Conference in Amsterdam next week, where he’ll discuss the shifting sands of Western political power over the centuries, the rise of centralized banking, government-controlled currency, and the recent surge in cryptocurrencies.

Currency was initially a fixed entity – for example gold or silver – meaning it was inherently limited in quantity. Banks, on the other hand, have gradually decoupled currency from such fixed commodities to create a system where money can be printed at will – which not only creates great wealth and power, but also creates great debt.

So how does cryptocurrency help curb this unsustainable growth in governmental power? We caught up with Molyneux ahead of his keynote next week to get some insights into the “self-limiting” nature of Bitcoin and the implications this may have for society.

The Next Web (TNW): Can you explain the nature of cryptocurrencies in terms of what makes them “self-limiting”? If demand rises, what is stopping more of them being made available out of thin air too, just like paper money?

Stefan Molyneux (SM): There are two answers to that question – the first pertains to Bitcoin, and the second pertains to multiple cryptocurrencies.

A new Bitcoin is created by solving a complex algorithm that becomes progressively more challenging over time – and only 21 million Bitcoins can ever be produced – this is hard-coded in the architecture.

Other cryptocurrencies can be produced at will, just as any store can produce gift certificates in its own name, but they will generally not become as widespread as currency itself – just as alternative cryptocurrencies will generally not become as widespread as Bitcoin. At the moment, for a few hundred dollars, you can create your own cryptocurrency. It is easy to imagine that bingo halls and poker parties might do just that, as will mom-and-pop stores who want to issue their own ‘gift certificates’. The degree of creativity and innovation in the realm of competing cryptocurrencies is a very positive development for consumers, and will doubtless produce the very best possible solutions.

TNW: To what extent will Bitcoin and other cryptocurrencies even things out, taking power back from governmental bodies?

SM: One of the most important aspects of cryptocurrencies is the degree to which they deny inter-generational debt, deficit-financing, and the easy money required for imperialism and war.

As a species, we generally consider ourselves to be very considerate and thoughtful towards the young. Unfortunately, that does not find reflection in our governmental policies, which burden the unborn with staggering debt, none of which would be possible with cryptocurrencies.

The power of the state to create money out of thin air, control interest rates, and pretend that it is providing value to the population, when it is merely debasing their currencies and lowering them into a chasm of debt, will face a serious challenge from Bitcoin and other cryptocurrencies.

TNW: We’re starting to see moves being made to better-regulate cryptocurrencies – won’t this put an end to the liberating facet of digital currencies? Or is it like pirating music – it’s impossible to fully regulate?

SM: I view the regulation of cryptocurrencies as a transition point to their wider adoption. No government wants to openly attempt to ban these currencies, because it would be broadcasting a lack of faith in its own currency by pursuing such a tyrannical action.

The more that governments can gain tax revenue out of digital currencies, the less they are likely to attempt any kind of crackdown. However, given the inevitable tendency of taxation and regulatory control to increase exponentially, many entrepreneurs will find creative ways to allow people to trade unencumbered by state power.

TNW: You’ve previously said that money-printing leads to debt and an unsustainable growth in governmental power – so what are the limits here? What, in your view, will happen to make this system crash and burn? What will force a turning point – cryptocurrencies? Or a combination of many factors?

SM: That which mathematically cannot continue, will not continue. However, it is impossible for any outsider to know the truth about how much governments really owe, what their unfunded liabilities are, and how much money is really being manufactured.

One beneficial aspect of the modern age is that the growth of massive dependent classes – in America in particular, almost half of the citizenry rely on the government for significant portions of their income – and the growth in the money supply which results in significant inflation, has traditionally been “solved” by war. [But] the proliferation of nuclear weapons has rendered modern war unthinkable, at least between the Western powers, so the traditional method of avoiding collapse by starting a war is no longer available. It is certainly my hope that the availability of digital currencies will provide a more gentle transition between state-controlled currency, and citizen-controlled value.

TNW: Do you think some element of regulation needs to be in place to restrict its volatility? We saw just recently Mt. Gox’s bankruptcy issues, it may even be liquidated, while Bitcoin valuations go up and down massively. So surely a lawless currency wouldn’t fix the status quo?

SM: I think that to assume that the word ‘regulation’ must apply to some centralized government agency is a mistake. Bitcoin, for instance, is very strictly regulated, in that new rules and procedures must be adopted by the majority of users in order to be propagated throughout the network. The moment you start talking about government ‘regulation’, you face the problem of ‘regulatory capture’, which is when the industries supposedly being regulated end up running the regulatory agency, donating massive amounts to politicians, and bending the rules in their own favor.

The failures at Mt. Gox have spurred significant innovations in security and authentication, specifically designed to prevent a recurrence of the incompetence or corruption that caused such losses. It’s important to remember that Bitcoin is only a few years old – how stable was the US dollar three years after its creation in the eighteenth century?

TNW: What factors need to align for Bitcoin and others to properly take off and become a standard form of currency? How far away are we from this being a fully acceptable, mainstream monetary system?

SM: It is important to remember that, depending on how you measure it, between a quarter and a third of the entire world’s economy operates in the black and gray markets. For these markets, Bitcoin and other cryptocurrencies are a natural fit. For developing countries, the high efficiency and extremely low transaction costs of digital currencies provide an unprecedented opportunity to develop a financial infrastructure without all of the associated political corruption. For instance, through Bitcoin, it is possible to run an entire stock exchange on a cell phone. Entrepreneurs in Africa can sell shares to investors without having to spend the millions of dollars required for an IPO through traditional Western stock markets.

Will you be at TNW Conference Europe?

Stefan Molyneux and many other speakers and startups will be taking to the stage at TNW Conference Europe in Amsterdam, from April 24-25. You can grab your ticket now.