We first covered On Voicefeed back in January, describing it at the time as a “turbo-charged alternative to Apple’s Visual Voicemail”. Now, it has rebranded and rolled out some new features.

Just to recap, ON Voicefeed is an iOS app that lets you set personalised voicemail greetings for when different people, or groups of people, call you. These can either be recorded as audio or entered as text, the latter meaning an automated voice will read out the message when people call, even personalising the message with their own full name or first name if they’re in your address book.

A product of Orange Vallée, the research and development department at France Telecom’s Orange Group, On Voicefeed has now rebranded as Libon Voicefeed and rolled out two key new features.

It now has a blacklisting function, which lets you greet callers unknown to you, or blocked numbers, with a customized greeting. So if you’re averse to being contacted anonymously, or don’t trust numbers not stored in your address book, Libon Voicefeed will let you leave a dedicated message. 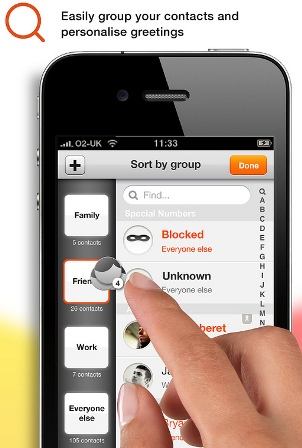 Also, with this latest update, you’ll be able to see which of your friends are using the app, with a new ‘suggested contacts’ feature on the main Contacts screen.

“The rebrand to Libon Voicefeed signifies the start of a very exciting period in the development of the app,” says Giles Corbett, Head of Libon Voicefeed at Orange Vallée. “We pride ourselves on the fact that we’re always listening to what our users have to say about improvements that could be made or new features they’d liked to be introduced. The new blacklisting feature is a perfect example of this – our users have requested this new feature, and we’ve delivered.”

The free version of Libon Voicefeed limits you to three personal greetings, plus one generic greeting, as well as one month’s worth of message storage and simple email voicemail alerts. You can make an in-app purchase of $9.99 (£6.99 GBP) a year, which will get you an unlimited storage period and let you receive email alerts with the voicemails attached.