Your Periscope feed could soon be full of extreme footage. There’s now an integration that allows the GoPro HERO4 Black or Silver to broadcast straight to Periscope. 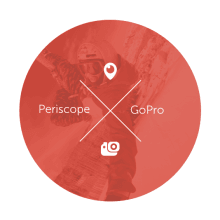 For iPhone users, the Periscope app will recognize a connected GoPro and give the option to broadcast from that device instead of using the phone camera.

Happily, you can also switch between the rear cameras on your phone and GoPro on the fly, and there’s a new lock screen switch so you can freeze your iPhone screen while boradcasting.

Recording via an SD card on a GoPro can be done during broadcasts.

The broadcast integration is iPhone-only, and Periscope doesn’t seem to have any plans on bringing it to Android. Viewers can watch GoPro footage on any platform, though.