PeoplePerHour, an online marketplace for businesses and freelancers, has announced the closure of a funding round worth $3.2 million today.

The latest batch of funding, described as a “Series A and a half”, was led by Index Ventures, with participation from Michael van Swaaij, the former CEO and chairman of Skype, as well as Klaus Nyengaard, the CEO of Just Eat. The UK-based startup, founded in 2008, is also launching an iPhone app today to help firms and professional freelancers manage commissions while out and about.

“Our app brings our 325,000-strong online workforce to your fingertips while you are on the go for almost any skill imaginable,” said Xenios Thrasyvoulou, CEO and Co-founder of PeoplePerHour. “Our vision is to make buying and selling of services as easy and widespread as buying on Amazon or eBay.”

The company says it will use the new funding to switch into a more “business development and marketing mode”, as well as making a few key hires ahead of its Series B funding round. It has already recruited a new Chief Financial Officer in David Engel, who was formerly the Financial Director of Skype and Yahoo Europe. Katie Kitiri, who was Head of Customer Service, Trust and Safety at Gumtree also joins PeoplePerHour as Director of Operations.

Thrasyvoulou said that with the new investment the company is now looking to carve out a better foothold in other markets outside the UK.

“Our goals over the next twelve months are to carry on building the team and the product, consolidate our position as market leader in the UK and expand to new markets,” added Thrasyvoulou. “In particular the US, where we recently set up an office in New York.” 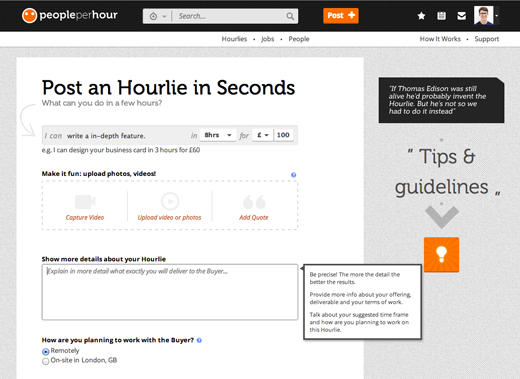 PeoplePerHour has undergone some pretty drastic changes recently. For starters it launched a new website back in August following a six month rebuild, introducing both a new design and user interface. The end result is a website that is pleasing on the eye but also incredibly simple to navigate. Registration and Facebook authentication is nestled appropriately at the top of each page, and within minutes you can start either posting a job or advertising your own professional services.

Offering your own skills as a freelancer is also really simple using the ‘Hourlies’ concept. Rather than charging by the hour, professionals pitch any pre-packaged service at a set price. It feels almost like a Kickstarter page, giving freelancers the ability to add videos, quotes and in-depth descriptions. If completed properly, it should give clients a really good idea of the sort of person they will be working with.

The company has said that since launching ‘Hourlies’ in August, they’ve had “tens of thousands” of listings uploaded to the PeoplePerHour website. The most popular categories are design, writing and digital, although the firm emphasized that there was also a long tail of more specific offers.

“What we are doing is truly revolutionary because it unlocks a vast under-utilized talent pool,” added Thrasyvoulou. “We envision a future where everyone is monetizing their spare time by doing things they love and building towards their financial independence. It’s literally a whole new economy in the making. It’s the future.”