As the Lytro Illum light field camera hits the streets today, it’s no surprise that similar photographic technologies in the shoot-first-focus-later genre are also breaking out of the lab and into the public eye.

Pelican Imaging has unveiled its own version of a variable focus camera, but unlike Lytro’s offering, it’s geared toward smartphones and other mobile devices. Pelican has posted some sample images to demonstrate the capabilities of its mobile light field camera, which has been under development for several years, and takes a much different approach than the Lytro. 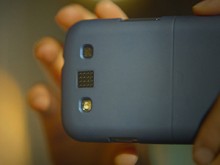 Built as an array of multiple cameras, each with its own sensor and lens, the Pelican captures images in native 3D, showing the scene’s depth information. The camera actually assigns a depth point to each pixel. Users can focus on any subject in the frame, change focus on multiple subjects after taking the shot, capture linear measurements, scale and segment images, change backgrounds and apply filters.

Note that your browser must support WebGL in order to view and adjust the images, and the effect does not work on iOS.

The accompanying software allows you to choose what to focus on, and lets you focus on multiple subjects at once. A segmentation tool allows you to add a person or an object to the picture with native scaling and placement based on the depth information contained in the frame.

Because the camera has no moving parts, you can immediately start shooting and keep shooting. Still image resolution is analogous to about 8 megapixels. And, at under 3mm in thickness, the Pelican array camera is also the first plenoptic camera  to also capture 1080p video at 30fps.