Back in March, Google announced Android Wear, a project that extends the company’s mobile operating system to wearables, kicking off with support for watches specifically.

A number of big-name brands have already used Wear on their timepieces, and some developers even let you create your own custom Android Wear watchface. Indeed, WearFaces is one such service, letting you personalize your smartwatch, be it a Samsung Gear, LG G, or Moto360. 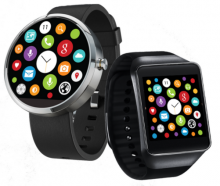 To help demonstrate this customization, WearFaces has launched the PEAR watchfaces for Android that are, erm, 100% original and bears zero resemblance to another fruity tech product. Someone has already created an Apple Watch-style design on their Moto360 too.

WearFaces has created a round and square version of the design to cater for different Android-based timepieces, and you can download them from here. It’s worth noting, that this is just a clockface – the icons aren’t functional.