Path, the much-discussed social app startup that is either a flop or ‘big in Asia’ depending on who you ask, is set to change its private messaging feature to an ‘ephemeral’ model next week, users have been informed.

As of June 11, all messages sent to other users will be available to them for just 24 hours before disappearing and being deleted from Path’s servers, the company says. “A limited number of messages” sent before that date will remain available, although logging out of the app, deleting or updating it will result in these histories disappearing too. 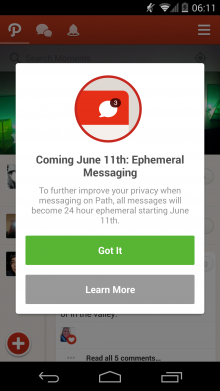 Path doesn’t explain why it’s made this move other than “to further improve your privacy,” but a cynic would suggest that the messaging feature isn’t all that popular and so the startup is attempting to spruce up interest by borrowing a trick from Snapchat.

That said, 24 hours isn’t quite as ‘ephemeral’ as Snapchat’s maximum of 10 seconds (‘temporary’ would seem a better description), and it’s unclear whether the move was prompted by user demand for such increased privacy or not.

Messaging was introduced in version 3.0 of Path back in March last year. Despite the app itself being a beautifully designed take on sharing moments in your life with only your closest friends, it has never really taken off in the US, leading many to label it a failure.

Still, CEO Dave Morin said in 2012 that usage was growing fastest in Asia, and a deal was signed with Sony in 2013 that saw all Xperia devices in the Asia Pacific region come preloaded with the app.

Data from app store analytics firm App Annie shows Path remains very popular in Indonesia (where it has been in the top 20 overall apps by downloads for most of the past year) although there has been a steady decline in downloads in other markets around the world over the same period.

We’ve contacted Path to find out more about what has prompted the change.

Update: Path declined to share any more information beyond that included in the help page linked to in the first paragraph of this article. The company also stated that its current total user base is in excess of 20 million.

Update 2: As Daniel Lynn points out in the comments, and my Dad points out on Twitter, the classical definition of ‘ephemeral’ is ‘lasting one day’, so Path can get away with the ‘ephemeral’ tag. Still, by today’s ephemeral messaging standards it’s waaay off the court.