Do you feel guilty when you read a newspaper? You probably should, according to BuzzFeed’s co-founder Jonah Peretti, who has “a moral issue” with print publishing and its environmental impact.

Peretti made this controversial comment during the latest edition of I Want Media’s panel, where he shared the stage with other well-known names in the online media. Here are some of the hot topics they discussed.

I Want Media’s founder Patrick Phillips kickstarted the debate he was moderating by asking the panelists a provocative question: “Is Facebook just a fad?” However, all of them begged to differ.

According to Reuters’ social media editor Anthony De Rosa, what makes Facebook interesting isn’t Facebook.com, but the way it embeds itself across the Internet. For Activate’s founder Michael Wolf, who has very recently joined Yahoo’s board, this is what differentiates Facebook from MySpace:

“MySpace was like a big party and the world moved on, while Facebook became more of a utility, as a way to organize the web,” he said.

Banner ads are a stopgap

The fact that Facebook forces advertisers to think beyond the banner ad could well be one of its most interesting forces, said The Daily’s publisher Greg Clayman. As a matter of fact, there was a clear consensus among the event’s speakers that banners are inefficient and that we have known this for years. 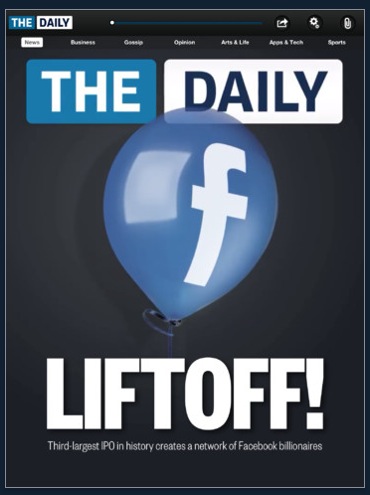 So why are they still around? According to Cooper, this is because they still work somewhat OK – or at least well enough for the advertising industry, which has always tolerated waste to a certain degree. Still, they might not stay forever. As Cooper and Peretti pointed out, people finally started to experiment with alternatives over the last few months.

Ultimately, there’s no doubt that in-context ads are much more effective. As a digital-only media outlet, The Daily has already taken things one step further, Clayman explained, saying that it actually sells content – not advertorial either, but ads that go much beyond the banner, may include video, and adjusted to the content to a certain degree.

For De Rosa, Tumblr is a good example of the fact that the line between advertising and editorial is increasingly blurred. Michael Wolf actually called this separation an anachronism, while Thrillist’s CEO Ben Lerer thinks blurred frontiers are not a problem, as long as brands are creating good content.

According to Jezebel’s editor in chief Jessica Coen, media outlets can also help brands adapt to this new environment, and Jezebel’s ad team recently hired someone with editorial expertise to work with them.

From an editorial perspective, there’s still a fine line that media outlets can’t cross if they don’t want to lose their editorial integrity. As Lerer putted it: “It’s about maintaining trust while making as much money as you possibly can.”

The power (and limits) of sharing

One of the most interesting trend in the media world is the shift from search to social, Peretti said. From an editorial perspective, it means that sites have to understand what drives people emotionally, rather than focus on keywords.

On this point, both BuzzFeed and Jezebel acknowledged that Facebook is now their largest traffic source by far – a trend they are comfortable with. Peretti declared that it was much more natural to write with Facebook’s algorithm in mind than with Google’s robot.

Coen pointed out that it is very democratic; if you produce the right type of content, that drives a reaction in your audience, people will share it. She gave the example of Jezebel’s post on the debate around race in the Hunger Games’ cast, which was the most shared post in the site’s and Gawker Media’s history.

It would be wrong to think this piece was shared because it was about Hunger Games; according to Coen, its huge success comes down to its topic, race, which deeply resonated with the audience.

While it is tempting for media outlets to use sharing numbers as an instant source of feedback, it shouldn’t be the only thing on their radar, speakers insisted. According to De Rosa, a good editor has to realize that shares are only a portion of the audience.

This is also true at BuzzFeed, which also covers serious stories it deems important. However, all of its stories end up on its homepage, without any type of barrier between ‘serious stuff’ and ‘funny’. Peretti explained this choice with a strange analogy; for him, browsing BuzzFeed is no different from being in a Parisian café and reading Le Monde while petting a dog. (Well, if you were on BuzzFeed, you’d be excused to click the ‘wtf’ button at this point.)

Phillips then proceeded to ask the speakers if newspapers are really dying; after all, Warren Buffett has just acquired 63 of them. Still, speakers agreed that the future of media was increasingly digital, a trend reinforced by the shift towards tablets, which are a great device for newsreading.

Peretti was clearly the most vehement against paper and its environmental impact (for some reason, he didn’t mention the debate around data centers’ carbon imprint). On the other hand, Coen explained that print has a sentimental value, and is still the most relevant format for beautiful glossy magazines

From a business perspective, the shift to digital will create losers and winners. While it opens new doors for small-sized newspapers, big media brands struggle to deal with their legacy business. Asked where the New York Times would be in five years, Peretti predicted that it would still be doing the same: “It won’t be a great business, due to its print legacy, but it will still do quality journalism.”

Here is the full video of the panel: