We’re no stranger to augmented reality (AR) app Blippar here at The Next Web, and the London-based startup has been racking up the brand partnerships in recent times.

The latest hook-up is an interesting one for sure, with betting company Paddy Power jumping on the AR bandwagon just in time for the start of the Euro 2012 football championships.

Five days after the Queen celebrated her Diamond Jubilee, Paddy Power has enlisted her majesty as a spokesperson through the power of technology and 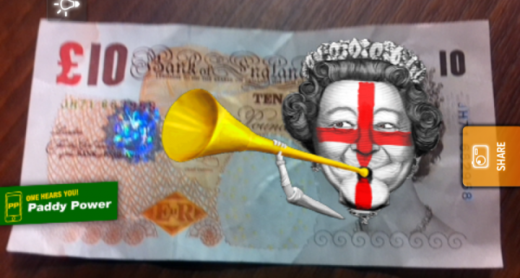 Queenie will be sharing her views on England’s chances, Wayne Rooney’s hair, “the cheating French” (I kid you not), the Germans’ penalty tactics, and anything else that makes the news during the tournament.

After downloading the Blippar app on iOS or Android, customers can ‘blipp’ any £10 note in circulation from today (Friday 8th June) by opening the app and holding their phone over it. An animated Queen will appear on the screen and a royal voice will give her opinion on footballing matters. The content is randomized and refreshed daily during the three-week tournament – so customers will see something new each time they blipp.

“I’m sure the Queen, like everyone else, has views on football, but as we’re unlikely to hear them we thought we’d use a bit of creative licence,” says a Paddy Power spokesperson. “It might put us at risk of getting thrown in the Tower of London but as we know she likes a flutter, we’re sure Her Majesty will see the funny side.”

Since it launched last year Blippar has partnered with major brands such as Nike, Sony, Heinz and Guinness to bring their products and advertising to life. Paddy Power is the first gambling brand it has worked with.

See a demo video of the Queen’s views on football here: