Checking a paper dictionary seems to be a thing of the past, looking up words online – many of us may be guilty of taking the word of a search engine to spot the most common spelling.

There are of course dictionaries online but looking things up when you’re on the move rather than seated at a desktop or laptop can mean pinching and scrolling through a horribly presented site that is not optimised for mobile devices.

Oxford Dictionaries has rolled out its responsive website design today so that when you’re stuck out and about or looking to win an argument in the pub, you’ll be able to check for a definition or spelling more easily. So, spelling pedants of the mobile Internet can rejoice. 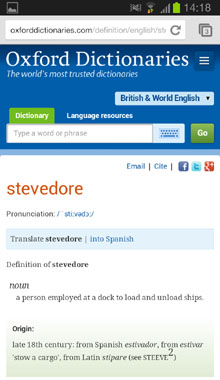 Glynnis Keir, Head of Online Dictionaries at Oxford University Press says that the new design should mean mobile users will have a better experience. “The single Oxford Dictionaries Online website domain means that mobile users aren’t restricted to a pared-down or simplified version of the site, nor do they need to alter URLs when switching devices.”

The new interface provides access to key features of the website including search and zooming and the menus are all now designed to for use with touch screens.

To create the design, Oxford Dictionaries partnered with IDM, a software development company with experience in digital publishing.

“IDM had previously supported the development of our dictionary department’s internal editorial system and worked on our desktop site, so it was a natural choice to partner with them for the responsive design rollout,” said Keir. 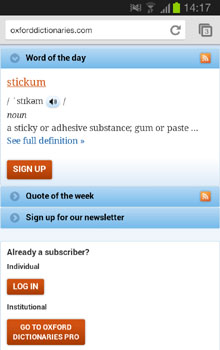 Vincent Lannoy, Deputy Managing Director at IDM said that his team was inspired by elements of Bootstrap, an open source toolkit from Twitter, to build the framework. “There are very few academic resources detailing how to implement responsive design, and few case studies of it being done well; as such we set out to create a framework in-house which was best suited to publishing dictionary data,” he said.

The fully responsive website went live in December with a few tweaks and refinements added after its release. Oxford Dictionaries Online is a free dictionary and language service, it provides the things you might expect for spelling and definitions as well as references and translations in French, German, Italian and Spanish.