If you’re looking to cut down your phone and text messaging bills, there’s no shortage of application makers ready to welcome you to their growing flock, including the likes of Skype, Viber, Rebtel, Nimbuzz, LINE and Tango, among a plethora of others.

That isn’t stopping new contenders for the mobile VoIP crown from stepping into the arena, and why should it? 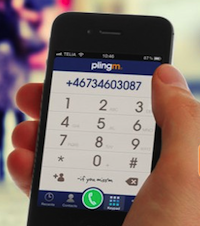 Enter Plingm, a Stockholm, Sweden-based startup that claims to offer HD-quality voice calls to landlines or mobile phone numbers over WiFi or 3G at much lower rates than Skype and other rivals, sans connection fees. That is outside the Plingm network of course – calls to other users are free of charge (as are its apps for Android and iOS).

It’s certainly a noteworthy proposition, but it will take many more such deals for Plingm to really make waves, and meanwhile its rival consumer-facing app makers have been racking up the downloads for years now.

Still, there’s no real disadvantage to having more companies enabling users to break away from carriers who overcharge for texting and voice calls, especially when calling abroad.

Who knows, Plingm may be just your cup of tea. Try it out and tell us how it stacks up against Skype, Viber or other mobile VoIP apps.

Free mobile messaging apps will be the death of SMS. Eventually. Just not yet.