Building on its prior success at tapping the lucrative movie-market through branding a day of the week (see here), UK mobile phone operator Orange has created a new tool that collates opinion and sentiment from across the Web, pulling in reviews from Twitter, Facebook and film websites and blogs.

Orange Film Pulse launches today just in time for the awards season, and it will immediately serve to monitor all the buzz going on around BAFTA-nominated films, letting film fans see which movies are generating the most love.

Launched as part of Orange’s sponsorship of the Orange British Academy Film Awards, the online tool scans thousands of tweets, Facebook Pages and websites. An algorithm analyses the text for tone, sentiment and review scores, summarizing the sentiment in a score out of 100.

There are currently 35 films included on Orange Film Pulse, including The Artist, My Week with Marilyn, War Horse and Hugo, with more due to be added in the coming weeks. A ticker along the top of the tool gives access to each film’s results.


There is also a search option for BAFTA-nominated films from the past and present that points to those available as part of Orange Wednesdays and Film To Go, Orange’s film rental offer. The mobile network launched “Orange Wednesdays” way back in 2003, and has proved immensely popular, giving its customer access to 2-for-1 cinema tickets.

The Orange Film Pulse has four columns of information which contribute to a film’s overall score:

The site defaults to the most popular film, which is currently The Artist:

“The Internet offers an incredible wealth of sources and opinion on film, but that also means the experience of searching for a definitive answer or opinion can be confusing and time consuming,” says Spencer McHugh, Brand Director at Orange UK. “With Orange Film Pulse, we’re offering a simple and easy way to see what the overall opinion from the web is, and encouraging film lovers to get involved and share their love for film, all of which contributes to that film’s overall score.”

Orange is the key brand of the France Telecom Group and, with around 131 million customers, Orange now encapsulates Internet, television and mobile services in most of the countries it operates in.

It’s interesting to note that the website uses real-time tweets which, of course, raises the age-old problem that most 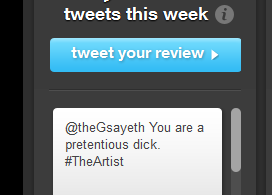 corporations are usually keen to avoid…namely, how do they keep vulgarity of the site?

As you can see from the real-time Twitter feed on the site, one movie fan wasn’t happy about something, and there’s certainly scope for the ‘banter’ to deteriorate much further.

However, it’s certainly an interesting platform and it should prove popular with those looking for a broad opinion on new movie releases.

Once the BAFTA season is over on February 12, the tool will move from its BAFTA domain to the Orange Film domain, and will continue to add new films from that point on.