Opinion Stage has launched a widget that lets bloggers and site owners easily integrate polls on their pages, the Israeli startup has announced. As you may know, it specializes in a specific type of surveys: the ones you can only answer with “yes” or “no.”

Thanks to the widget, you can now add existing debates to your website, or create your own question by using Opinion Stage’s platform. Here’s what a debate page looks like:

As you can see, the debate page includes a small summary of the issue. While users have the option to share their vote on Facebook, this is not mandatory and they can also choose to vote anonymously. Below the fold, the page also includes contributions in which users explain the arguments behind their vote.

You may also have noticed the ‘Get Code’ button at the top right. Once you click it, you will get the embed code you need to add the widget to your website:

As you can see, it gives a pretty accurate preview of how the final version of the debate will look like:

While several startups let you poll your audience, Opinion Stage has the merit of simplicity – not only because of its yes/no approach, but also because its platform is very easy to use, which is also the case of this new widget.

It’s worth noting that the widget is more than a feature, and makes the whole concept much more relevant. While I wouldn’t necessarily go to a specific site to give my opinion on a series of topics on a regular basis, I am much more inclined to chime in if a debate shows up in the context of a page I am reading. From the publishers’ perspective, it is also an interesting and easy way to engage their audience. 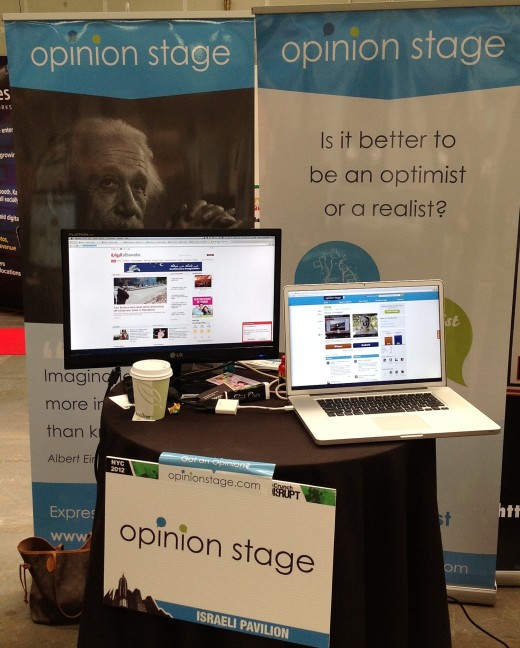 Yet, Opinion Stage also makes sense as a standalone platform, thanks to personalization. As its founder and CEO Assaf Parag explained to us during TC Disrupt in New York last May, users who register on the site through Facebook Connect can get access to a customized home page, with debates you are likely to be interested in.

While the site is still in beta, Parag and his co-founder Gil Yoffe already know that it has social at its core, as one of its roles is to help you find like-minded people – something that Facebook doesn’t facilitate as much as it could.

Once you have found people you like, you can follow them on Opinion Stage and read their takes on specific topics. It also works the other way around: if you are browsing a debate on a specific topic, you can choose to filter opinions and only display the votes of people you trust, which obviously adds value to the platform – while remaining optional if you want to avoid ‘filter bubbles.’