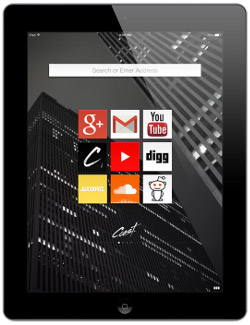 Norwegian browser-maker Opera has updated its Coast iPad app for the first time. The browser has dispensed with the back and forward buttons that were central to its first incarnation, they’ve been replaced by a slick swipe-based navigation system — not unlike that within the recently launched Opera app for Android tablets.

Aside from the claimed speed improvements you’d expect from Opera, the app has gotten smarter at handling Web-based music with its own player. Visiting websites like SoundCloud automatically brings up a graphic equalizer-style control that also loads from the lockscreen.

Minor additions include better handling of PDFs — users can assign an app to open them — and more options for customizing backgrounds: images from the camera roll can now be used.

Related: Opera rethinks tablets with Coast, a new gesture-heavy browser for the iPad