OpenSignal, formerly known as OpenSignalMaps, has rolled out a brand new version of its Android app, an app which helps create independent maps of mobile phone network coverage based on information crowdsourced from Android users.

We last reported on OpenSignal back in September, when it landed $1.3m from Qualcomm and others to help extend its mobile coverage maps.

With 2.5m downloads globally, and an iPhone app on the way, OpenSignal is among the biggest sources of independent data on the speed and coverage of mobile phone carriers. Indeed, rather than relying on coverage maps provided by networks themselves, OpenSignal want to open up this data to anyone, so they can see for themselves which ones offer the best coverage where they are.

Indeed, the millions of downloads it has garnered so far, across 200 countries and more than 1,000 networks, certainly goes some way towards achieving this. And given that it has also released the first version of its API, giving third-party developers an opportunity to harness this data, this is one company we reckon will only go from strength to strength.

With the latest version of the app, you can identify a better network connection, using the app’s in-built signal compass to point you in a better direction.

You can also look at the crowdsourced Coverage maps within the app, and compare the quality of mobile networks on your phone with data from 200 countries worldwide. The redder the colour, the stronger the signal.

You can select the network that interests you most from a dropdown menu, and choose to look at 2G, 3G, 4G or all three. The Network Rank tab at the bottom lets you see which network performs best in the area you’re interested in. 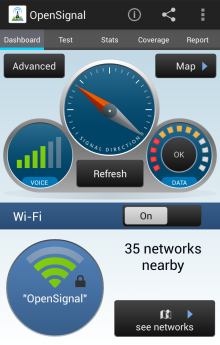 OpenSignal also directs you towards nearby public WiFi networks, and highlights them clearly on a map, with more than 100 million hotspots logged to date. 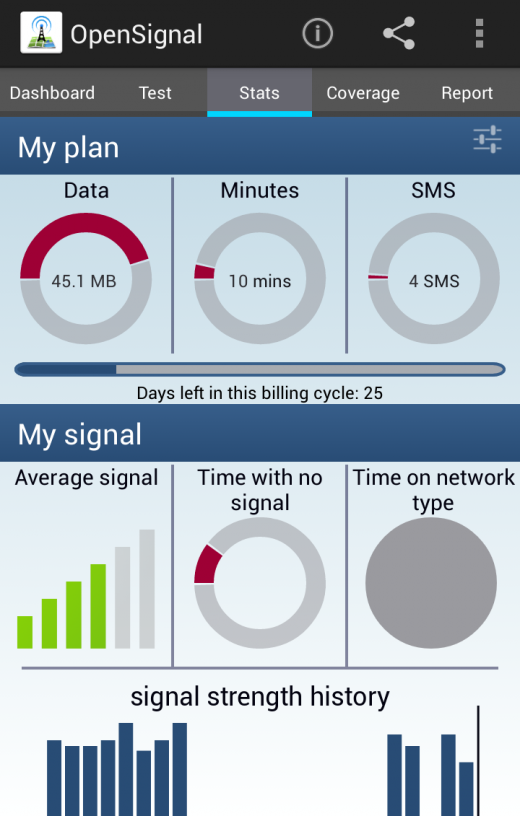 Other neat features include the ability to test the speed of your data connection, and monitor your data, text and voice usage, through the new ‘Stats’ tab. You can even see your signal strength history.

OpenSignal’s offering is certainly impressive, and off the back of its recent round of funding, the introduction of a version for iOS can’t come quickly enough, as similar service Rootmetrics already offers.

“For far too long consumers have had to accept the statistics that network provide about their own speed and coverage, and it’s part of our project to open up this information for general consumption,” the company explains in its announcement. “Everyone who downloads our app helps to contribute to our database and improve the quality of our information.”

The new app is available to download now from Google Play.