In an interesting post on the Marketing Week Live blog today, Tim Ocock of Steely Eye Digital Media has unearthed an oddity in adverts on public transport in London. There are of course billboards and transport posters that carry URLs and QR codes for the mobile curious, but it seems that once an advert link it opened, it might not work on your mobile.

As few people are likely to shoot a QR code with their laptop while they are in transit, it begs the question, if so much money is thrown at advertising around the capital, how could this have been missed?

With wifi coming to the London Underground and Overland train systems and of course the odd bit of 3G signal that works on buses, it would be a mistake for marketers to miss the opportunity for commuters to engage with their brands. Ocock says that they are just not mobile friendly. 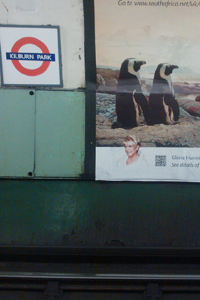 When Ocock says ‘mobile friendly’, he defines this as, “Light page weight for fast loading, without Flash or other incompatible media, optimised for the small screen, not requiring pinch and zoom to be able to read the text.” The ABCs of mobile you would think, making sure that there is mobile optimisation for a site when it is placed in front of an audience in transit makes sense.

As Ocock rightly points out, “We can’t imagine the designers of these ads really expect people to write down the URLs to check later at home. Even when QR codes are used they are rarely practical to scan on a busy Tube concourse – but you would think that anyone putting a QR code on their ad, as some of the afore mentioned culprits do, would be expecting visitors to be browsing on their phones.”

This nugget of curious information is a part of further research by Steely Eye. The firm also has an app called “Works on Mobile” for iOS and Android that helps to identify where bad mobile advertising exists.

Though the practice of mobile marketing linked to physical advertising is in it’s fledgling form, there are things that would make the process a bit easier. Not putting QR codes in strange places and at least having a mobile site to go to would be a good start.