The world is moving toward a paper-free financial system, but in the borderline-legal organizations of the world’s underbelly economy, cash still reigns as king.

Any good business owner is keen to please his or her customers, particularly when it comes to prostitution. To avoid the awkward fumble of cash after a lusty romp, the frictionless convenience of digital payment systems is becoming more attractive.

How long before sex workers and escort services in the US and Europe start accepting payments via services like Venmo and PayPal, and currencies such as Bitcoin, instead of cash?

The business of sex

While the sex industry may be the world’s oldest profession, the internet has done well to disrupt it. Prostitutes and escort services in the Western world have taken their business online, using sites like Facebook, Craigslist and Backpage to advertise instead of street corners.

When PayPal opened its virtual doors in 2001, some of its first customers were those working in the sex industry. But in recent years, the eBay owned company has been noticeably cracking down. Any website promoting prostitution or pornography with a recognizable “Pay Now” button is at high risk of having its accounts closed and assets frozen.

According to a representative of SWOP Chicago, a grassroots organization dedicated to improving the lives of current and former sex workers in the Chicago area, PayPal is notoriously opposed to the sex industry. She says that many people she knows have had their accounts disabled because PayPal found out about their business. And if this happens when there is still money in the account, she says PayPal won’t release the funds.

As an alternative, she points out that prepaid MasterCard and Visa gift cards are becoming more popular. But even still, companies such as Green Dot have recently come down on the industry as well, shutting down accounts due to “suspicious” charges.

Peter*, a 26-year old Brit living in NYC, says he is too fearful of using services like PayPal in case he were ever found out.

“It’s an illegal activity,” says Peter, who works at a record label. “If they were ever busted, that transaction could be traced back to me.”

Even those who are tech-savvy shy from using the most basic form of digital payment.

“I’ve never seen a prostitute take PayPal, Bitcoin, Venmo or Square but I have been asked if I want to use a credit card,” says William*, a 29-year old founder of a dating app. “But I would never use a card, I don’t need AMEX knowing I go to an Asian spa on 3rd Avenue every so often!”

William says he uses cash 100 percent of the time, although he would use Bitcoin if it were on offer. “It would make me a lot more comfortable if they took any form of cryptocurrency that is semi-anonymous,” he says. “It feels dirty passing cash at the end of our time together.”

While William says he was expecting to see digital payments on offer in Amsterdam’s Red Light District, he says it’s still a cash-first business there, too. He notes that rates for prostitution start at €50 ($67) compared to $200 in the US. 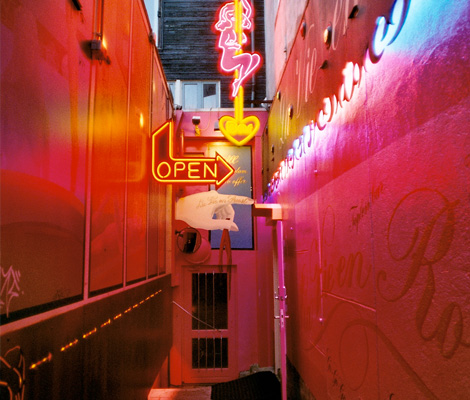 Starting on March 20, 2014, Amsterdam’s Bitcoin Boulevard opened up an entire street of commerce to Bitcoin payments.

CoinDesk reports that while it was a hard sell at first, many of the restaurant owners started seeing the advantages of Bitcoin – such as the low transaction costs, the ease of payment for international guests and the promotional value.

If this takes off, perhaps it’s just a matter of time before Bitcoin Boulevard’s influence reaches Amsterdam’s Red Light District.

Ellen Malloy, a wife and mother of a newborn, says that she encourages her partner Michael* to visit prostitutes. “I will spare you the gory details but he picks up tips from the experts that he brings home to the boudoir,” she says.

Michael says that when possible, he prefers to make payments two to four days in advance via PayPal before any assignation with prostitutes.

“It is a more practical and less awkward way of doing business than handing over cash at the end,” explains Ellen. “More sex workers are adopting this transaction method, which I approve of.”

In the UK, while brothels are against the law, the exchange of sexual services for money as well as ‘escort’ agencies are actually legal. And north-west of London in Birmingham, they are even taking Bitcoin and Litecoin.

Once the payment is processed, Passion VIP confirms the appointment, eliminating any stress around payment, theft or counterfeit on either side of the transaction. The cost for one hour of a “Standard” lady’s time is 1.711 BTC, which at current Bitcoin exchange rates will cost you around $1,030.

For many sex workers, digital payment options have made transactions fast, straightforward and discreet. But payment methods such as PayPal, Square or any credit card means there will be a record. And given the fact that, legal or not, at the end of the day, prostitution is something that most husbands, wives, families, girlfriends and members of the general population are not particularly fond of, cash is still the most popular way to pay for items off the books.

For the sex industry, PayPal and Venmo will never replace cash. But cryptocurrencies like Bitcoin and Litcoin that offer anonymity just might.

*All names were changed for this article.