Steve Jobs passed away today, Wednesday October 5, 2011, at the age of 56. As the chairman and co-founder of Apple, Jobs irrevocably changed the way we use and think about technology with his intense interest in making it better, easier to use and more beautiful.

As an orphan of immigrant parentage who rose to the literal pinnacle of his calling through hard work and invention, Jobs epitomizes the American myth. When coupled with his obvious skill as a CEO and public speaker, it made him a fascinating character to watch. When you’re passionate about something, when you live and breathe it, it shows.

Yes, Jobs was a gifted orator and showman, but that was augmented by his love and passion for his products because he had a hand in causing them to be. The impact of that personal connection cannot be understated.

Jobs died peacefully and is survived by his wife Laureen and four children and they will miss him as a man who “cherished his family.”

The rest of us will miss him in a less intimate, but somehow still personal, way. 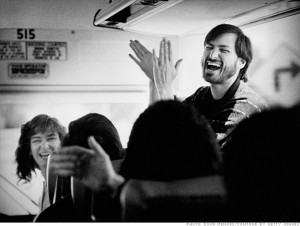 In his span here on Earth, Jobs defined the computer as something more than a tool. He made it personal. He founded a company, was forced to leave it behind and brought it back from the edge of disaster on his return. It is now the most valuable in the world.

Not content to simply change the device that would soon come to define our world, Jobs also turned his attention to music and mobile phones and made the way that we use gadgets made of glass and metal more personal.

Known simply as ‘Steve’ to most of us, he was nevertheless a private man who gave every ounce of himself that he was prepared to give in the creation of a product.

That product isn’t the massive cash pile that Apple is sitting on, or Steve’s impressive trove of patents, it’s not even the intensely dominant iPad. Instead, it was Apple, and the way that he imbued it with his way of thought and the drive to continuously reinvent itself.

Steve wasn’t perfect by any definition of the word. He also had plenty of traits that people find distasteful. He could be incredibly demanding and short-tempered. He got irritated with the press, a lot. He was spectacularly wrong about some of Apple’s products and leveraged every bit of his persuasiveness to try to convince the public otherwise. He even had a reputation for a puckish delight in misleading competitors and journalists. But that doesn’t change the fact that he will likely be remembered as one of the best business leaders of our time.

In a response to a question about the symbolic value of his return to Apple in 1997 after being ousted in 1985 from the company that he helped create, Jobs was blunt about the fact that Apple was more than a puppet with his hand inside. “You’re missing it. This is not a one-man show,” he said. “What’s reinvigorating this company is…there’s a lot of really talented people in this company who listened to the world tell them they were losers for a couple of years, and some of them were on the verge of starting to believe it themselves. But they’re not losers. What they didn’t have was a good set of coaches, a good plan. A good senior management team. But they have that now.”

Regardless of the reputation that Steve had for riding his employees hard and expecting the world out of them, they still have a reputation as some of the most loyal of any on the planet.

In 1997, Apple’s logo still bore the characteristic multicolored apple that had been its mark almost since its founding. 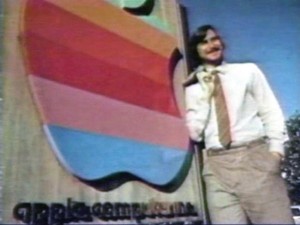 When Jobs returned to Apple that year, he asked an unnamed employee why he didn’t just leave during the company’s dark years. The employee replied, “we bleed 6 colors.”

Steve Jobs created Apple as a company in his own image. By turns brilliant, secretive, prescient and yes, a bit of a hard ass. As huge as Apple is as a company it has managed to maintain some of the rebel spirit that drew Jobs to the music of Bob Dylan. Through its constant willingness to treat the status quo as a rule to be broken, Apple has defied conventional wisdom over and over as pundits predicted its doom at every turn.

Steve Jobs’ attitude towards building the company that Apple is today can be summed up with a response to a question he was asked about how the younger generation of entrepreneurs were handling their success in starting companies.

…there are many moments that are filled with despair and agony, when you have to fire people and cancel things and deal with very difficult situations. That’s when you find out who you are and what your values are. So when these people sell out, even though they get fabulously rich, they’re gypping themselves out of one of the potentially most rewarding experiences of their unfolding lives. Without it, they may never know their values or how to keep their newfound wealth in perspective.

The very way that Steve solved problems was imbued in the company at a molecular level. I was once told by a 20 year Apple veteran that if 10 or 20 engineers was working on a problem, it was instinctively known that they were doing something wrong. Apple thrives on one or two person teams creating things passionately and being edited conscientiously by superiors that care.

“Design is a funny word,” Steve said, “some people think design means how it looks. But of course, if you dig deeper, it’s really how it works.”

Apple was founded by Steve Jobs, Steve Wozniak and Ronald Wayne in 1976. Even from the first moments of its existence, it has been a conduit for the philosophy and vision of Steve Jobs. However, throughout the past decade have we seen signs that Jobs hasn’t just been producing the next iMac, iPod or iPad.

He has instead been crafting Apple itself, his last great ‘one more thing.’ 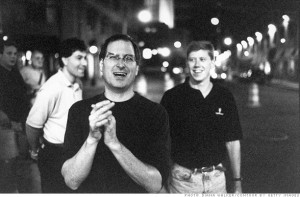 Steve taught us to look beyond how something worked and think about how it made us feel. Millions of people have been inspired to create beautiful, meaningful things by using the tools that Steve—by way of Apple—provided.

These tools were inspiring because they themselves were beautiful and imbued with a sense of care and purpose. It is this sense of craftsmanship and quivering, consuming attention to detail that is perhaps at the heart of the way that the news of Steve’s passing is affecting those who have used his creations.

Because Steve put so much of what he was into what he made, it made every time you picked up an iPad, an iPhone or sat down at a Mac, feel like a conversation with him. You would use it and he would smile back at you as you marveled at its feeling of clarity and the way it made you feel like you were living in the future that we had always been promised.

Too young, too young; many will no doubt say today and in the time that follows. But the truth is that any age would have been too young to lose Steve.

We would always have been waiting for him to change everything again, just one more time.