A few weeks ago I sent out a tweet that laid out, very simply, what our responsibilities were as a tech blog. We have a responsibility first to our readers, then second to the companies that we cover.

That raised a bit of a stink, because many bloggers (and readers) tell me that we shouldn’t have a responsibility to the companies. They think that, in doing so, we become puppets of them. I disagree, obviously, and today I’m angry about how a certain site screwed over a certain startup, so it’s time to put these thoughts into black and white.

Above all, we must be accurate in what we report. I’m not necessarily talking about opinion pieces or the stuff you see over on Shareables, but if it’s a news story then we owe it to you to not publish until the story is right. If we make a mistake, which does happen, we then owe it to you to give a clear explanation of the mistake, and to provide the correct information.

The aforementioned startup got screwed by the blog because the writer didn’t bother to clarify what they were told. Now a deal that could mean huge success to the startup lies in the balance because the party controlling the deal didn’t like what the startup had to say. The only problem? It’s not actually what the startup said.

The accuracy of what we report is every bit as much for the readers as it is for the companies. If we’re accurate, then we’re fair almost by default. If we’re accurate then the credit or blame will be placed exactly where it should be, each and every time. 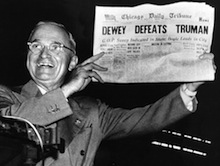 But accuracy doesn’t always make a great headline, and that’s the problem. Because some people choose to write for the headline and not the story, companies get smacked with things that they never said. Fates can hang by a tenuous thread and that’s exactly what has happened in the past few days with the startup in question.

Feel free to call a spade a spade, but just make sure that you’re playing with a full deck first.