Hot on the heels of yesterday’s news that EU price caps on mobile data roaming were coming into force from this July, restricting EU networks to charging no more than €0.70 (plus VAT) per megabyte of data, UK operator O2 has announced a new data roaming plan for its customers which is kicking in to effect from this summer.

O2, Telefónica’s UK subsidiary, is the country’s second biggest mobile network with around 22m customers. And with the launch of O2 Travel this July, it’s hoping to tap into the growing band of merry travelers looking to continue using their smartphone’s Internet whilst holidaying in Europe.

As it stands, O2 charges £3.07 per MB of data in Europe, with a default £40 cap in place, at which point you can use another 50MB without being charged. This new data-roaming deal will see O2’s pay-monthly (including small-businesses) AND pay-as-you-go customers offered 25MB of data per day for £1.99.

But what does it mean…

To bring some context to this, a Skype video call on your iPhone may use up to 4MB a minute, and a rich multimedia Web page (e.g. BBC ) will consume around 0.33MB per page and a lot less for a basic Web page such as Twitter. An hour of online radio will consume 62MB, whilst fifteen minutes of streaming YouTube videos will likely consume around 25MB of data [Source].

It’s probably worth stressing here though, that if O2 pay monthly customers exceed their daily 25MB data allowance, they will automatically be moved to the standard European data rate of €0.70+VAT/MB (£0.70 GBP in total) for the rest of the day, and they will receive text alerts when they hit 80% and 100% of usage. Pay-as-you-go customers, on the other hand, will be able to buy a ‘snacking’ bolt-on of another 25 MB / day for £1.99 / day.

So, this will be a good deal for some people, but for those who wish to continue their data-sapping Internet-browsing abroad, downloading and streaming to their heart’s content, you would maybe want to secure yourself a local SIM card for the country your traveling to. Or even use a service such as Tep, which gives you your own portable WiFi access when you’re on the move.

In an extra little caveat here that’s probably worth mentioning, BlackBerry customers on pay-as-you-go won’t be able to use O2 Travel, and will need to purchase a special bolt-on for data access. This is due to “technical reasons”, which it aims to fix by the end of this year.

According to O2’s stats, mobile data-roaming is growing at more than 100% a year, and almost two-thirds of its customers who use the mobile Internet in the UK also use it whilst abroad.

Facebook, Google and BBC News are the most popular websites to visit while on holiday, and France and Spain are the most popular countries for customers calling back to the UK. The 37 European territories that fall under O2 Travel account for 80% or its roaming traffic. Just so you know… 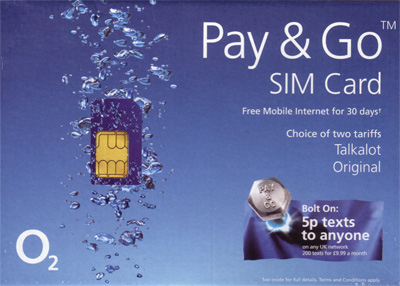 Also, in an interesting move, when making voice calls, O2’s pay-monthly customers will be charged a one-off 50p per call, with minutes then taken from their existing domestic tariff, which actually seems pretty decent. As it stands, it costs £0.35 a minute to call ‘in zone’ across the EU, so unless you’re planning on making a series of short 1-minute calls, you should stand to benefit from this.

Moreover, it will now cost £0.50 to answer your phone (pay monthly), which seems a little on the steep side, but then it’s free to talk thereafter, which will work out better if you’re planning to talk for more than 4 or 5 minutes.

O2 pay-as-you-go customers who don’t normally have bundled minutes, will pay the standard rate for phone calls (from 29p/min to make calls and 9p/min to receive calls.

So these are interesting moves for sure, and we’ll likely see a slew of new offers and deals from all the mobile network carriers in the UK in the build up to July’s regulations coming into effect.

“We know people want to able to relax and enjoy their holidays without worrying about complicated phone charges,” says Sally Cowdry, Marketing & Consumer Director for O2 UK says. “With simple charges and a generous 25MB data bundle, O2 Travel provides a great way for our customers to keep in touch and share their holiday moments with family and friends without having to worry about the costs.”

The full details of the O2 Travel plan will be live on its site on May 21st, and in terms of how you’ll be able to access this, the company will announce details closer to the July launch date.