German entrepreneur Marco Boerries’ stealth business app platform has attracted $38m in Series A funding (PDF) from top European and US investors before it even launches a product.

NumberFour AG, the company behind the upcoming platform, is headquartered in Berlin with offices in Hamburg and Palo Alto. About 40 developers are currently working on the project.

So far there’s little more than a landing page, but the company promises to give small businesses “instant access to the tools, capabilities and insights normally only available to larger companies” using a suite of small and versatile apps.

A big Series A for Berlin – and Europe 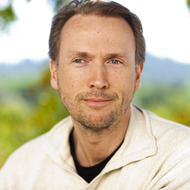 Boerries (pictured right), 45, spent about a decade permanently based in Silicon Valley after selling his first company StarDivision, which built the software that became OpenOffice, to Bechtolsheim’s Sun Microsystems in 1999. He sold his third company VerdiSoft to Yahoo in 2005 and spent four years as a top mobile exec for the internet giant before leaving to return to Germany in February 2009.

That’s not long before he started work on NumberFour. “I’ve actually been thinking about this problem for the last 25 years,” Boerries told us this week – he’d made a first foray into accounting tools for small businesses back at StarDivision but decided the timing wasn’t right.

Small business market worth the risk

NumberFour’s apps will cover productivity, communication, sales, production, procurement, delivery, reservation and financial tools, and run on smartphones, tablets and the web. The company’s LinkedIn profile describes it as an “open software platform for business application development”, which suggests plans to release an API.

The company isn’t commenting at this point on pricing and availability other than to say it will be “very affordable and it will be available when it’s ready”.

NumberFour estimates there are over 200 million small businesses worldwide and that those with under 20 employees make up 90 per cent of businesses globally. That, plus Boerries’ experience, seems to be enough to convince investors – many of whom have worked with Boerries before – that it’s worth the risk on a product that could still flop at launch.

“From a technology perspective, small businesses are the most underserved market in the world,” Index Ventures partner Mike Volpi, the round’s lead investor, said in a statement today. “NumberFour is the first comprehensive business platform that offers amazing technology, wrapped in apps with a stunningly simple user interface.”

Boerries hasn’t taken much venture capital for previous ventures – in part because it wasn’t so much the done thing back in the ’90s. It’s too early to tell if it’ll pay off this time.

“Of course, I’m very aware of the responsibilities for us,” he said. “These guys trust us a great deal. They’re putting their money where their mouth is by writing a cheque that’s really, really big for something they are convinced will be successful – we will make sure when we ship it we deliver on that trust.”

Images via Thinkstock and HackFwd