Ron Croen, the founder of Nuance Communication, the company that powers Siri, has just launched a new venture. Called Volio, it is an interactive video platform powered by a user’s voice. The company is launching today and is kicking things off by supporting Esquire magazine’s “Talk to Esquire” app for iOS devices. 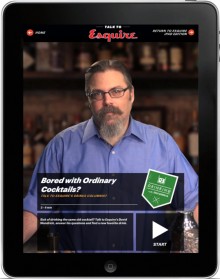 Volio says that it enables media creators, brands, marketers, and entertainers to create “topical, highly engaging, distinctively personalized one-on-one experiences.” In the case of Esquire, the publications’ columnists will engage readers by asking them questions and providing customized information and advice based on responses.

Esquire says that its “Talk to Esquire” iOS app is centered around a key need: to bridge the gap between the expert content makers and those readers who seek advice. It cites an example of Grooming Expert Rodney Cutler — a user might be unsure of what product is right for his hair. Using the app, the Cutler is “engaged” and learns more about the user, such as his hair and personal style. In the end, Volio’s system will be able to have Cutler provide the right information based on the given inputs.

Croen founded Nuance in 1994 and it became a publicly traded company many years afterwards. He left the company in 2003 and six years later became the entrepreneur-in-residence at The Gordon Institute’s Entrepreneurial Leadership Program at Tuft University’s School of Engineering.

According to Croen’s LinkedIn profile, in October 2011, he started a new company called Numeme, Inc., which is described as a “stealth mode startup in digital, social media space.” As noted on the company’s AngelList page, Numeme became Volio.

Croen isn’t the only founder of Volio — there are two others, including Mohammad Gorjestani and Mark Anikst. It has been backed by angel invesors such as Andreessen Horowitz, 500 Startups, and others.