This article was published on December 30, 2012

For over a year now, every last Friday of the month, we’ve published a fresh issue of TNW Magazine, our tablet-only digital magazine. Our first issues were all iPad only. Then the Retina iPad was introduced so we optimized for that. It was a bit more work to optimize for two iPads, but not so much that we minded. And the magazine looked spectacular on the retina screen so it was worth the extra effort. 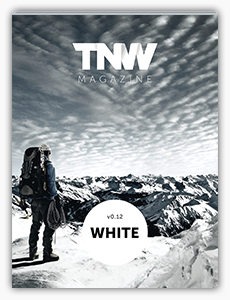 We use Mag+ software to produce our magazine, and at one point they announced support for the iPhone and asked us to become a launch partner. We jumped at the opportunity and produced a third format, for the iPhone.

With every issue we published we also received a lot of requests for an Android version of the magazine. We had bought a Kindle Fire and a Nexus 7 and Mag+ offered support for both platforms, so we played around with it a bit and ended up publishing a version for Android.

To be honest; it wasn’t easy. In theory you simply adjust for a different format and platform and do a new export. But then trouble starts. As one developer put it to us: “You make a beautiful magazine for the iPad, and then you dumb it down for Android’.

That meant removing movies, sound, interactivity and content. But even then we had to deal with frequent crashes, a less intuitive interface and a platform that is even more fragmented than iOS.

Then there was the content. See, we pick movies from the iTunes store that people can download right to their iPads. We pick music the same way and books too. Producing for Android meant that we had to redo all that work because all our content was restricted to the iOS platform. That isn’t Android’s fault, of course, but because the platform is just less developed and robust we had started out with iOS and optimized for that.

All of that wouldn’t have been a problem if we had seen a market for our magazine on Android. And we did believe there would be one. We had gotten enough requests for it and had gotten the impression there were thousands of anxious Android tablets owners holding their breath for an Android version of our magazine. Unfortunately we’ve found out that although Android users are very vocal they aren’t very active when it comes to downloading and reading magazines. Or maybe they just don’t like our magazine. You never know.

To give you some insight in how little uptake we saw on Android here are some statistics: for every Android user that downloads an Android magazine we have 80 iOS downloads.

Now if it would be as easy as just running an extra export for the other platform this wouldn’t be a problem. Turning an iPad retina magazine version into a iPad regular or iPhone version takes a few hours at the most. Turning an iPad magazine into an Android magazine takes 3 to 4 days. We would rather spend those extra 3 or 4 days on making the iPad version mores spectacular with more embedded music and more interactivity.

When we started producing this magazine we figured it would be an experiment and we would take a year to build up an audience and find a format that would work for us. We’ve tried a lot, failed a lot and learned a lot. And sometimes we try something and find out it doesn’t work for us.

We tried an Android magazine, and found out it just isn’t worth the effort. Does that mean that Android sucks? Ehm, no, and there is no reason to tell us how cool Android is in the comments, because we understand it is. It just means that with the current state of technology and the way the market is divided we can’t afford to invest in it anymore.

This month’s magazine will be the last Android optimized issue. Starting 2013 we will only publish for iOS.

P.S. I’ve talked to digital magazine blog ‘Talking New Media’ about our decision too. See their take on this.