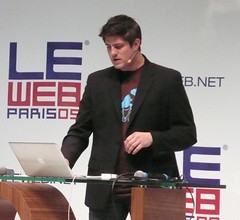 Ryan Sarver, Director of Platform at Twitter today at Le Web talked about Twitter and a few important changes on how they are going to talk to and work with developers and applications.

He startes out pointing out that there was only one twitter application in 2007, now there are 50,000 registered ones. A majority of users at Twitter experience Twitter on partner sites.

Ryan talked a bit about three applications that are doing well as businesses: CoTweet, OneRiot and  Tweetmeme. No details on how well they are doing though. They are examples however of serious and mature companies that are built around Twitter.

1: Firehose will become available for everyone
More details will follow but expect to pay for it.

2: New Twitter Developers platform
A new spiffy site with documentation, tutorials, status dashboard, forum, FAQ’s and everything else you need to develop Twitter applications. Will launch in a few weeks.

3: Move to OAuth
OAuth applications get 10 times more access calls than before. An API for Browser-less apps. Basic OAUth deprecation in june 2010

Maybe I’m just paranoid but that sounds a bit like taxes. The money I make the more money the government wants from me. Will Twitter start taxing developers for successful companies that make money via Twitter? How it will play out exactly will be announced in early 2010 but looking forward to your interpretations in the comments here.