While most believe that the brain of the most primitive animals trumps that of any “intelligent robot”, we are actually fast-approaching the day when we’ll build hardware sophisticated enough to replicate a natural brain.

This is not a Transformers-like fantasy. There’s no reason to fear a malicious robot army trying to seize world domination in the (near) future. Reality is much more interesting and could potentially bring a giant leap for modern robotics, medicine and neurology.

The BrainScaleS project is a collaboration of fifteen research institutions, led by the Kirchhoff-Institute for Physics in Heidelberg, Germany, that is creating hardware that emulates parts of a natural brain. The project is based on developing what was named “neuromorphic hardware” by the researchers in Heidelberg, simulative electronic systems that reconstruct the behavior of synapses through electrical components, like transistors and microchips. 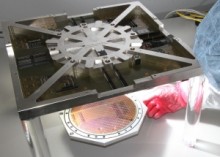 “Our goal is to create a working system that will be located in Heidelberg, but accessible online to scientists all over the world.”

The prototype only represents a tiny fraction of a working brain, but is efficient for examining the processing of natural nerve signals in time-lapse. Three years from now when the project is finished, the hardware-brain model will re-create neurological processes 10,000 times faster than they take place in a natural biological system. “That means that if we want to study a behaviour [in the nervous system] that would take a few minutes in the real biology, it will only take us split seconds,” says Johannes.

But why do all this? So far, brain research has mostly relied on computer simulation. Researchers would use a high-capacity computer system able to run a program that tries to simulate the behaviour of a nervous system. There have been popular attempts at creating a synthetic brain in software, such as Henry Markram‘s Blue Brain Project. The initial goal of the Blue Brain Project was the simulation of a rat neocortical column, which was achieved in 2006. Building a functional simulation of a human brain is Markram’s next ambitious target.

Others, like physicist-turned-neuroscientist Sebastian Seung, focus on the latest hot space in neuroscience: connectomics, or the wiring of the human brain. Seung’s team at the MIT tries to invent technologies for identifying and describing the connectome, the totality of connections between the brain’s ca. 100 million neurons. In a TED talk two years ago, he took 20 minutes to attempt to explain the inconceivable complexity of our brain’s neuron system, and the challenges to visualize the human mind in order to understand it, maybe only a little bit, better.

So what is the big difference, and which is more important for modelling the brain, of the two: software that visualizes it, or hardware that replicates it? The problem is that the software simulation is hooked on the processing power – and there are no system available yet that could keep up with a biological nervous system. To simulate a mammalian brain, we would need an entire power plant. And that’s “just completely impractical”, in Johannes’s words.

“Modeling is essential for neuroscience. If we don’t have models to reconstruct the performance of neurones and synapses, we will never understand how the brain works. We can’t just stuff all this into equations, the behaviour of each individual cell is far too complex for that,” he says.

That’s why Johannes and his team have turned away from software, and to electronics. Having a working system that emulates parts of a functioning brain will help us to analyse, and eventually truly understand the way the brain works in an entirely new manner. Hardware like this will allow us to develop intelligent control systems, which will have a tremendous effect on robotics. Again, no Transformers here – but we’ll see systems that are increasingly powerful, adaptive and more resilient to errors.

Goals like these have motivated research into a connection between neuroscience and computing for a long time. Only in autumn 2011 researchers at the Massachusetts Institute of Technology presented a computer chip that mimics how the brain’s neurons adapt in response to new information, simulating the activity of a single brain synapse. “There are about 100 billion neurons in the human brain, each of which has synapses — or gaps — between it and other neurons. Emulating one is a step “for building truly intelligent brain systems,” researcher Chi-Sang Poon told msnbc.com’s John Roach in November.

One of the most interesting aspects in neuroscience is the brain’s ability to learn, says Johannes.  So when we begin to think about brain-simulating electronic systems, especially in relation to robotics, what comes to mind is the amazing image of technology that is able to learn. The idea of an adaptive computer system is fascinating, but extremely complicated. In biology, the neurons and synapses in our brain allow us to learn. Neurons, millions evolving from a single cell, grow through cell division and simultaneously exchange signals with their environment and so adjust to their individual functions within the nervous system. That is what scientists have to replicate.

“The problem is, we can analyse single neurones, but not millions and millions individually. That’s why we calculate with statistical models. This involves unbelievably many parameters we can’t measure directly.” The one major drawback of neuromorphe hardware is after all that hardware is not as flexible as biology. In this sense, software has the big advantage of being more easily re-programmed and adjusted. “Come new fundamental findings from biologists, we might just have to change our hardware from scratch.”

One of the principal tasks BrainScaleS need to follow is that it creates a platform for collaboration between neurologists, biologists, physicists and IT scholars to combine as much knowledge as possible and create that system that allows as much flexibility as possible.

“How well it all works out we’ll find out in the next few years. We’ll find out the gaps, learn from them and design the next generation [of neuromorphe hardware].”