Five years ago, when Chris Stang and Andrew Steinthal were two music executives frustrated with the grandiosity of food criticism, they self-published a review of Manhattan’s Gemma. Their outlet was the Infatuation — a blog, traditional by then — but the tone was something new. Equal parts down-to-earth, lighthearted, and accessible, the Infatuation provided an unfortunately-rare type of dinin​g advice: the type young people could actually act upon.

Of course, five years online is quite some time, and since then, Stang and Steinthal have built up a significant following by coupling this tone with advances in technology. In addition to their blog, they’ve released an iPhone app, taken to Twitter, and built a following on Instagram nearing 100,000 users, many of whom engage with team’s signature hashtag, #EEEEEATS.

They’ve also published an annual iBook, the Guide to Killing It This Summer, as a means of guiding New Yorkers toward daily al fresco dining and drinking.

As it turns out, using technology to compete with an oft-dated form of criticism has its payoffs. The duo has left the music business, and this year’s guide is a testament to its growth. The 77-page iBook covers 35 bars and restaurants, with brief write-ups and high resolution photography, as well as craft beer and warm-weather wine suggestions.

“It’s sort of like March Madness with patios,” says Stang of the annual selection process. “We make a list of the new places that have opened since the previous summer, and start checking them out to see if they make the cut. Then we look at some of our favorites from the first two guides, put them together, and narrow it down to a final list.”

By this iteration, readers will recognize the tone and even some of the stops, but the content reflects a growing brand and expanded partnerships.

Growing up on the Internet

Stang and Steinthal have now stepped beyond the confines of the city to include Destination Infatuation, where they cover weekend trips to places like Cooperstown, the North Fork (“the Hampton’s red-headed step brother”) and the Hamptons themselves, which they say is “most definitely saturated with crop tops, designer Birkenstocks and maybe Kardashians.”

“We’re just trying to mix it up and keep it useful,” Steinthal says of the expansion. “We do Destination Infatuation travel guide pieces on the site and they do really well.”

Denim brand Paige, with whom they partnered at SXSW last year — the #SmokeAndDenim dinner at Austin’s Foreign & Domestic — came on board as a sponsor, expanding the content beyond food to include looks with each destination.

“Now that we’re full time and can focus on scaling the business, we’ve definitely started to ramp up on both the partnerships and events side,” says Steinthal. “We built the Infatuation for five years while holding demanding, high level jobs in the music business, and now that we’ve left, it’s a whole new ball game,” he continues.

“You can get so much more done when you only have one thing to focus on, and 100 percent of your time dedicated to it.”

Operating like a technology startup, rather than publication, remains a core value for Stang and Steinthal. Their demographic is young, and just as their editorial signatures — biting honesty, and brevity for quick consumption — are an expectation, so, too, is the ability to access that work on the go. 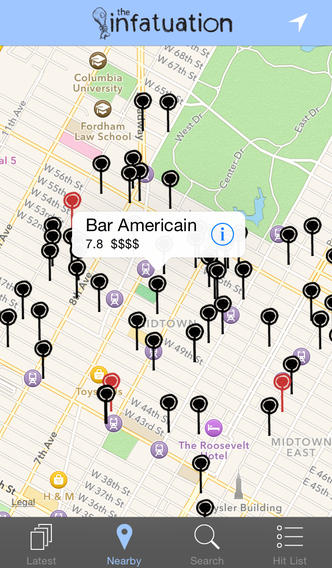 Their iPhone app and mobile site are set for updates, and an Android app is slated for beta testing in the near future.

“Our audience is much younger than most of our competitors’, so staying on top of mobile is particularly important to our growth,” says Stang. “We’re also excited about the idea of doing other lightweight apps which help people solve problems, as well as continuing to release digital ebooks and guides.”

Scalability, with this startup-lean in mind, is part of the plan. This summer, coverage will expand to San Francisco, Chicago, and Denver, followed by Austin and Nashville. By 2015, they’ll be abroad.

“How we choose where we go is partially about singling out cities we think we’ll do well in, and also about where we can finding the right people who can represent our voice for that specific city,” says Steinthal. “The right people have found us in all the markets we’re launching this year, and the plan is to get to places like London, LA, DC and Sydney, Australia, in 2015.”

To this end, technology may be the lesser of the challenges. How the anti-foodie tone carries city by city, then country by country, will make for an interesting challenge, one that Steinthal and Stang have tested with forays to places as distant as Paris.

In New York, though, the voice remains a trusted one; expect to hear it at Williamsburg’s Maison Premiere, Dumbo’s Vinegar Hill House and Narcissa at the Standard Hotel – their top selections for the summer.