New York City will soon welcome a delegation of Latin American entrepreneurs, the city’s Economic Development Corporation (NYCEDC) has announced. Called ‘LatAm to NYC,’ the program is part of a larger initiative aimed at attracting foreign businesses, known as ‘World to NYC.’

During the three-day event, which will take place from August 6th to 8th, participants will receive useful information to young companies interested in expanding or locating their businesses in New York, while meeting potential partners and getting to know the city’s start-up scene. 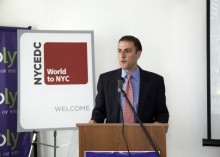 This isn’t the first time NYCEDC has organized this type of events. Over the last couple of years, it has welcomed foreign visitors from London, China and Singapore, as well as an international delegation which focused more specifically on tech startups. According to the program’s coordinator, Patricia Bayley, “all four of these iterations have put [NYCEDC] in discussion with over 100 companies, resulting in relocation interest of 20 companies within the next 12 months.”

This was just a start; no later than today, the city is playing host to Latino2, a conference focusing on the Latin American presence in tech startups, which is taking place at Google’s offices in New York. According to American entrepreneur and The Next Web’s contributor Rich Yang, ‘World to NYC’ contributed to boost these connections:

“Having lived in NYC, participated in Start-Up Chile and now working from Brazil, I’ve seen the landscape of investors and entrepreneurs in both Latin America and NY. When I participated in the event this past January, It was amazing to see how much NYC has progressed in terms of the start up community in just a year. Even with the multitudes of events, the EDC gives visiting entrepreneurs a quick network of resources to tap into to make their transition into NY easier.”

Interested entrepreneurs have until June 11th to apply for the program, which will take place from August 6th to 8th. While participants will have to cover their own travel expenses, the event itself is free.