It’s incredibly foolhardy to ascribe any concrete plans to Apple based on the publishing of a patent. The company is incredibly prolific in this department, publishing literally thousands a year. Sometimes, however, a patent is interesting enough to point out just because it indicates that the very smart engineers at the company are even thinking about a topic.

That’s the category that a patent granted to Apple today falls into. It’s entitled “Peripheral treatment for head-mounted displays” and it centers around techniques for projecting an image onto the eyes of a user via a viewable display. Much in the way that Google’s Project Glass appears to work.

Here’s the abstract description from the patent:

Basically, there are one or two LCDs used to project an image onto a user’s eyes. Displays like this normally do not project an image into the peripheral vision of a user, instead taking on the appearance of a ‘screen’ floating out in space. This patent is a spin on that behavior, outlining the mechanics of a system that would fill the peripheral vision as well as the ‘direct’ vision of a user. 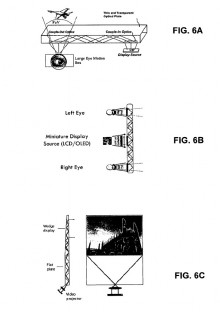 This means that the system is designed for a ‘full immersion’ device, not a ‘walk around’ device like Project Glass, although it shares many of the same properties of a ‘near-to-eye’ system like Glass. These head mounted displays (HMDs) have long been thought to be a natural progression of personalized computer displays.

The patent also talks about the two images being projected stereoscopically to each eye. This creates a feeling of immersion that can eliminate the motion sickness typically exhibited with HMDs and increase brightness as well as produce a larger field of view.

So, this patent definitely does not mean that Apple is in the process of producing a piece of wearable ‘iGlasses’ or anything of the sort, but it definitely does show that some very smart people at the company are thinking about ways to make wearable computing more accessible and immersive. And that’s exciting enough for me.