In celebration of YouTube Live‘s first birthday, the team has announced some noteworthy new features for those with early access. 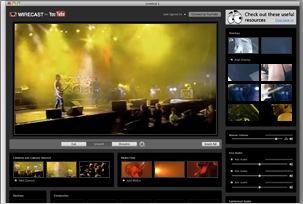 Wirecast for YouTube Live is now available for free to partners, allowing users to produce and stream professional-looking live events directly to YouTube. The software originally costs upwards of $400, so by giving it away, YouTube is helping to make the entire process of managing live events more accessible.

Real-time analytics is another new feature, which makes a whole lot of sense given YouTube Live’s immediacy. Users will be able to see real-time access to data like playbacks and concurrent viewers of their live streams by geography and format. Users also now have a guided flow to set up and preview live events before going live.

Another new feature brings monetization to live video, allowing users to set up advertising and even paid options (aka pay-per-view). According to YouTube, a live event can be claimed in the new video manager like any other video and monetized with instream ads or paid options where users can set price by country.

As Varun Talwar, YouTube partner product manager writes, these new features were built to be used by tons of YouTubers, but at the moment, YouTube Live is still not open to the masses. Until then, Happy Birthday YouTube Live.