The information about this deal started to emerge last December when it was about to be finalized, but the availability date of the 13-episode thriller had remained unclear until now. 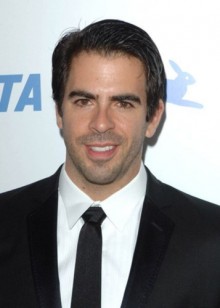 As some of you may have guessed from its title, ‘Hemlock Grove’ is an adaptation of Brian McGreevy’s novel with the same title.

Produced by Gaumont International Television and directed by the horror master Eli Roth, it will star Famke Janssen and Bill Skarsgard, in what Netflix describes as “a gripping tale of murder, mystery and monsters set in a ravaged Pennsylvania steel town”.

According to Netflix’s Chief Content Officer Ted Sarandos,”‘Hemlock Grove’ is a sly blend of J.D. Salinger and Mary Shelley and will appeal to a broad base of fans captivated by these rich characters and stunning visuals.”

This is also Eli Roth’s first venture into what he tellingly calls “television”, although he is quick at pointing out differences with traditional media:

“What’s most exciting to me is creating the series for Netflix, which as a feature filmmaker is like telling a story in a new medium.  Netflix as a platform is the perfect hybrid of cinema, television, and social networking, with the creative freedom to go as dark as the story needs,” Roth says.

From Netflix’s perspective, this announcement follows other ventures into original content from the company. Last February, it already released its first original show, ‘Lilyhammer’, and it also announced in November that it would resurrect the cult series ‘Arrested  Development’ in 2013.

As we reported, this strategy is increasingly common among online video players, with Netflix’s competitors Hulu and Amazon also commissioning exclusive series. Yet, the execution is slightly different. While Amazon may reportedly start to create some of its exclusive content in-house, Netflix’s series so far have still been produced by third parties.

Despite the fact that ‘Hemlock Grove’ will be exclusive to Netflix, you may still expect to see it on TV in some countries, as Netflix may try to monetize secondary rights. As a matter of fact, it sold its first series ‘Lilyhammer’ to the BBC, while Hulu has recently signed a partnership with FremantleMedia, in which the distributor will handle international sales of Hulu’s original content.