Take 18-year-old Ben Lang, for example. When you talk to him about his projects, he speaks about some of them in the past tense. Meaning, he has already moved on to bigger and better things.

His latest project is MySchoolHelp, a site focused on helping high school students share notes to prepare for tests and quizzes. This is a type of entrepreneurial focus that excites me, because it’s a service that fits a very specific need. Technology is much-needed in Education, and Ben Lang is taking full advantage of the opportunity.

Here’s a video explaining the note sharing site MySchoolHelp, which will host PDF’s and let people favorite and rate content from those who attend the same school as they do.

I had a chance to talk to Founder Ben Lang about MySchoolHelp and his participation in the Teens in Tech incubator.

TNW: Where did you get the idea for MySchoolHelp, and how long did it take to develop?

Ben Lang: The idea stemmed from RamazHelp.com, a note sharing site I cofounded two years ago just for my high school, Ramaz. Over the past few years the site has gained wild popularity in my high school with over 70% of the student body using it regularly. In its first year over 100 notes were uploaded and in the second year over 200. Also in the yearbooks they joke about it and when they bring in new potential students they mention it.

Based off that success I decided to create a note sharing site for all high schools to use. With a team I brought on, we finished building the site in about 3 months.

TNW: What was it specifically about note taking at school that told you it needed its own service? 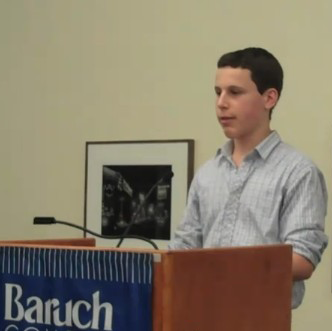 Ben Lang: Before each test and final every student would dash to the library to photocopy other student’s notes. It was a madhouse, trees were killed in the process. I decided to make it a more efficient process by allowing students to simply upload all of their notes from their computer onto a central site. They shared notes that they took on their laptops and scanned in handwritten notes.

Even with the growth of learning platforms online the best way to study still is by reading class notes. No teacher teaches the exact same class around the globe which is why it’s crucial to have notes specifically taken in that class.

TNW: How many notes does MySchoolHelp host right now?

Ben Lang: After launching two months ago we’ve had 165 notes uploaded so far. Right now our focus is encouraging more students to share their notes. Even though at my school students uploaded out of their good will we’re trying to make it more “incentivized” to upload. First off, we have a leaderboard with the top note takers from your school: http://prntscr.com/3s1eo, increasing the gameification aspect of submitting notes. We also have some amazing sponsors who contributed prizes to give away to note takers, such as Fandango tickets, premium Evernote accounts, Livescribe pens and Starbucks gift cards.

TNW: Can you share any success stories from students that you’ve heard about how the site helped them with a test?

Ben Lang: Sure, for RamazHelp, the predecessor to MySchoolHelp we’ve gotten amazing feedback such as:

“RamazHelp was the epicenter of all my studying, an absolute academic life saver for me and every other student at my school.” – Zachary Weiner
“I’m going off to college in a few weeks, and I can truthfully say I would have never gotten through school without RamazHelp.” – Shalti Serels

So far in the two months that MySchoolHelp has been in the air there haven’t been enough tests to hear about success stories, but as the school year goes on we’re looking forward to hearing similar stories to that of above.

TNW: Do you want to expand the service into Colleges, if so, when and how?

Ben Lang: Right now we’re testing the service at a few colleges. Some of my classmates from Ramaz who graduated and went to college kept asking for us to expand the service to colleges which is why we’re testing it now. Our focus is still high schools but we’re open to seeing how this model will work in colleges. There are plenty of note sharing platforms for colleges but our “differentiator” is that we’re 100% free, signup isn’t required and it’s more about the positive aspect of sharing and collaborating.

TNW: Tell us about your experiences in the Teens in Tech Incubator

Ben Lang: Attending the Teens In Tech Incubator was certainly an incredible experience. We were all provided with incredible mentors, a wonderful office and helpful workshops. At the end Mozilla was kind enough to extend its hand to a few of the teams for the WebFWD accelerator which we’re now a part of.

The type of service that a site like MySchoolHelp provides could make the difference between a student falling behind in class, and getting a leg up. The way Ben Lang has started the service, by getting over 100 schools to adopt it, is reminiscent of Facebook’s slow infiltration in the 90’s. Schools need technology, and it’s nice to see focus there. Can Lang see it all the way through before getting drawn into the Valley like Zuckerberg did?