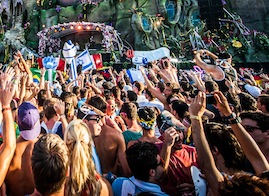 The online music streaming industry is highly competitive right now. Turntable, the company behind the music streaming site Turntable.fm, obviously recognizes these challenges — and it has rolled out a new feature in a bid to differentiate its flagship service: live performance streaming.

In a Tumblr post, the company describes Turntable Live as “a new platform for supporting artists.” It hosts live and interactive shows with artists online, in which users can ask questions and send snapshots, alongside the star of the program: the music.

A ticket to each concert that is being aired on Turntable Live costs $3. The first performance just launched a few hours ago in partnership with the New York City music festival CBGB, headlined by indie pop/rock band Beat Radio.

➤ Turntable.fm begins streaming live, interactive concerts, but tickets will cost you [The Verge]