This weekend saw Barcelona’s 19th festival of advanced music and new media art, better known as Sónar, take place in the heart of the Catalan city.

As you might expect, there were DJs, beer and sunshine but also, tucked away in a dimly lit hall working day and night was a selection of hackers from around the world, trying to create new applications and services that reflect our current relationships with music.

The general festival goers were up until the small hours dancing to the likes of The 2 Bears, The Roots, Mary Anne Hobbs and Hot Chip and although we are reliably informed that some of the hackers managed to leave their laptops to get the odd drink; there was a great deal of dedication to getting some surprising work done in barely one day and night.

The Music Hackday event provided participants with APIs from Deezer, Echonest, Gracenote, Spotify, Zvooq, SoundCloud, Music Metric, Reactable, Musixmatch and 7Digital among others. The hackers were encouraged to use any of them, possibly in combination, to create something musically interesting.

The divide between the average music consumer and the technicians who create new ways to get to those tracks seemed quite stark during the day as dancers drank beer in the sunshine and hackers indoors worked on anything from visualisation, categorisation and remixing just behind the main stage for the daytime events at the Centre for Contemporary Culture, Barcelona (CCCB).

There were around forty presentations at the end of the event, and you can find the full list of works on the Music Hackday wiki.

The standard of work for the whole event was incredibly high, out of all of the presentations there were only one or two that didn’t go so well for the presentations, but their general idea was still apparent.

The future of music seen through the eyes of these hackers is a highly immersive place with cross-overs that might seem strange now but are possibilities for every day in the future.

One hack linked the weather forecast for the week and built a playlist based on mood tags for that climate and songs with similar tags, another connected geolocated images and moods in that place with a music collection for recalling a specific time, place and track for people who travel.

The question of legal access to copyright material appeared in the form of some great innovation. One project compared the top tracks that are BitTorrented and found a way to listen to them all legally inside Spotify, another considered the sounds of copyright tracks and attempted to recreate those songs with free track sounds making a whole new piece of music.

The fact that the end result sounded nothing like the original was mostly irrelevant to the presentation as the engineering involved was impressive and the idea itself will no doubt open up future works in a similar vein. 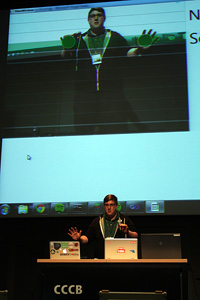 The physicality of music and movement was shown off with a phone app that made use of the accelerometer to beatbox over streamed a capella rap tracks and a kinect program that turned a whole body into an instrument. Both seemed to infer dancing – of a sort – and were very entertaining to watch.

Colour and art were also explored with the extraordinary application that provided a colour wheel and then explored album covers that included those colours to create a play list. Surprisingly this creates a pretty coherent line up of tracks as many album covers appear to follow colour codes to match their genre – think of metal and black backgrounds or green for punk and blue for jazz.

Another way of engineering colour into sound was the project that connected colour and moods for music to come up with a palette for designers to use that would reflect musical changes.

All in all, the hacks were surprising and many of them were very useful. There might be a question as to how the music genres translated into cat pictures app might find a use case but it was fun to explore jazz-felines in pictures, like a range of musical lolcats.

Though it might seem strange to head to Barcelona for sunshine and a live music festival and stay indoors, it is the work of people like these hackers that will no doubt unlock the ideas for the next big applications and provide us with tools we probably never knew we needed to explore sound in the future.